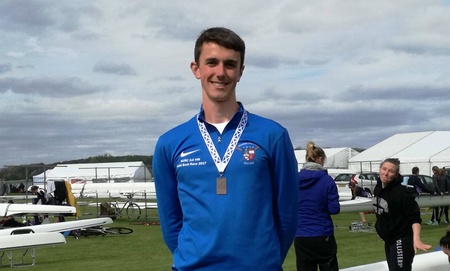 A former Spanish junior rowing champion has swapped sunny climes for Aberdeen's River Dee to compete in one of Scotland's most hotly-contested rowing events.

Alex Zabala (19) from A Coruna, Spain will be part of the eight-strong team that will row for the University of Aberdeen against Robert Gordon University in the Aberdeen Boat Race, sponsored by Aberdeen Standard Investments, on March 17.

What began as an after-school hobby at the age of nine soon became something much more for Alex, who now studies pharmacology.  “I started rowing with a group of friends because we thought it would just be a good social activity, but I ended up really enjoying it,” he said.

Alex’s rowing career was put on pause three years later when his family relocated to Poland – but not before he made a splash on the national rowing scene. In 2010, Alex won a gold medal in a single in the Spanish championships.

“I was 11 or 12 at the time, and I really wasn’t expecting to win. I had come sixth the year before, and I didn’t know what I was capable of. Even though we trained a lot, it was always quite friendly and never too competitive. So, when I won, it was incredible!”

Moving around Poland, Alex’s family settled in Warsaw where he was able to pick up rowing again, however this time it was purely recreational. When university came calling, though, competitive rowing was back on Alex’s mind.

“When I came to study in Aberdeen, I knew I definitely had to join the Aberdeen University Boat Club (AUBC). Rowing is such a big part of university life for so many people, and I knew I wanted to experience that for myself, so I made sure to check out the university before I came to make sure it had a club.

“I have family in Scotland – my aunt lives in Perth, and my aunt, uncle and cousins are near Crieff – so I knew Scotland was a great place to live. And when I visited Aberdeen I really liked the city and everyone was so friendly: I knew it was the place for me.”

It would be great to win again this year and start our own winning streak" Alex Zabala, Aberdeen University Boat Club

“Winning last year was exhilarating. We have a friendly rivalry with RGUBC, so it was great to be able to reclaim the title. Some of the rowers who have been in the club a lot longer than me had lost for a few years in a row, so the pressure was on to win.

“It would be great to win again this year and start our own winning streak; to show that it wasn’t a one-time thing, and that we’re growing stronger every day as a club. Plus, there’ll be a lot of talk and banter about the race over the next year, and no-one wants to be on the losing side of that!

“Rowing can be quite a painful sport, both physically and mentally, but it’s so rewarding. It really makes you feel very accomplished. When you’re rowing with a crew, you have a very strong connection with them; it’s difficult to put into words. Sometimes I wonder why I put myself through it all, but I always come back for more. I’m addicted!”

While Alex aims for a lab-based career working in drug development, he still has lofty ambitions on the water – and would love to return to competing nationally. “My goal is to be selected to compete for Scotland at the Home International Regatta, and ultimately to be selected for Team GB.

“I’ve been improving a lot since last year, and I continue to set new personal bests and improve my technique. So, by the end of this year, I think I’ll be in quite a strong position on the water.

“Every bit of training is important but working with the boat race crew is always a bit unusual. We row in mixed crews, which brings together different people who wouldn’t normally race together. It’s a special opportunity and brings a different energy to the race.”

Martin Gilbert, co-chief executive of title sponsor Aberdeen Standard Investments, comments, “At university it’s important to find a balance between your studies and other interests so it’s great to hear Alex’s story. The strength of Aberdeen universities’ sports clubs and societies, along with each institute’s world-class reputation in education, provides an incredibly attractive prospect to potential students looking to study in Aberdeen.”