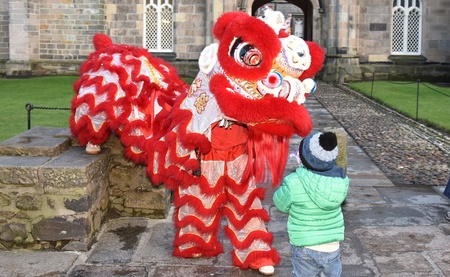 A fun-packed show for children will mark the start of Chinese New Year celebrations at the University of Aberdeen, which this year is expected to attract close to 1000 visitors.

With more events that ever before, the University’s Confucius Institute will mark the Year of the Dog with a show for children at 2pm this Saturday, February 17, featuring a traditional lion and dragon dance, a demonstration from Yee's Hung Ga Scotland Kung Fu, and music and dance courtesy of the Redphoenix dance group and Harmony Chinese Music Ensemble.

This will be followed by an evening Chinese New Year Gala show from 7.30pm - 9pm which will also include a comedy show and student performance.

On Sunday, the University will host a free Chinese New Year Festival from 10am - 3pm with arts and crafts, games, and dumpling making.  There’s also the opportunity to learn about giant pandas, including Yang Guang and Tian Tian at Edinburgh Zoo, courtesy of the Royal Zoological Society for Scotland’s ‘Beyond the Panda’ education programme.

The celebrations will move elsewhere the following weekend, when the University takes Chinese New Year to Inverurie Town Hall on Saturday, February 24, from 10am - 3pm.

The Chinese New Year Festival Inverurie will feature another demonstration from Yee's Hung Ga Scotland Kung Fu, along with music and dance, a fun chopstick skills workshop and Jianzi -  a Chinese version of ‘keepy uppy’ where players aim to keep a heavily weighted shuttlecock in the air.

Our celebrations are a great way for people to find out more about Chinese traditions, language and culture" Dr Michelle Macleod, Director of the University of Aberdeen's Confucius Institute

“Last year more than 800 people attended our King’s College campus, and this year we are expecting well over 1000 people across the four events we have planned.

“Along with traditional celebrations at King’s College we are tremendously excited at the prospect of taking Chinese New Year ‘on the road’ when we head to Inverurie the following weekend.

“Our celebrations are a great way for people to find out more about Chinese traditions, language and culture, and I would encourage anyone with an interest to join us for an authentic Chinese New Year experience.”

*For further information, and to register your interest in attending, please click here