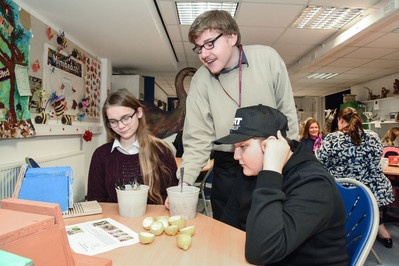 The University of Aberdeen, Aberdeen City Council and the Gaelic parent group Comann nam Pàrant have joined forces in order to provide Gaelic speaking school pupils with the opportunity to carry out an activity based award scheme - translated into Gaelic.

The Aberdeen Biodiversity Centre (ABC), based in the University’s Zoology Building, have been running the John Muir Awards since 2015, and were approached by an Education Officer from Aberdeen City Council to help them devise an extra-curricular Gaelic related activity for a group of local secondary school pupils.

Staff at the ABC were keen to get involved and enlisted the help of Gaelic-speaking student, Frederic Bayer.

The John Muir Award is broken down into four main themes: Discover, Explore, Conserve and Share and each participant has to complete a four day programme of activities in these categories in order to gain the first level of the award, the ‘Discovery’ Award.

The students, who were from Hazlehead Academy, Cults Academy and Aberdeen Grammar School, undertook a variety of tasks in order to achieve their Discovery award, including a conservation tour of the Cruickshank Gardens with Mark Paterson the Curator of the gardens, building bird and bat boxes, a conifer tree trail and then finally showcasing all their work at an event where they were also presented with certificates.

Vicky Ewan from the Aberdeen Biodiversity Centre commented: “When Anne from the council got in touch and asked if it would be possible for us to incorporate Gaelic into the John Muir Award programme, we were immediately up for the challenge.

“The scheme itself is fantastic to work on and we were pretty sure it would translate well into Gaelic, however as myself and my colleague, Liz Campbell, don’t speak the language we were thrilled to have Frederic on board to help us.

We are really pleased with how this partnership has worked out and I think everyone involved has got a lot from the project, and it is great that going forward there are now Gaelic resources in place for the John Muir Award." Vicky Ewan

“We are really pleased with how this partnership has worked out and I think everyone involved has got a lot from the project, and it is great that going forward there are now Gaelic resources in place for the John Muir Award.”

Anne Thirkell, Education Officer at Aberdeen City Council, added: “The idea for setting up a Gaelic John Muir Award in Aberdeen was so that Gaelic speaking secondary school pupils would have an extra-curricular Gaelic related activity in the city.  The pupils don’t all attend the same school, so it was important to have something that pupils from different schools could attend.

“I initially contacted the Biodiversity Centre to see if they would consider running the award with a Gaelic speaking leader, and I was delighted with their enthusiasm right from the very start and the way in which they developed the award to allow the pupils to further develop their Gaelic literacy as well as widen their knowledge of their local environment and how to protect it.  As they have worked with other groups with specific needs, it was clear to me how adaptable the Centre was able to be in planning learning for individual groups.  The Centre worked extremely well with Fred Bayer, a Gaelic student at the University, who undertook the role of Gaelic leader for the award, and together produced a good range of Gaelic materials that will be useful to other groups delivering the award in Gaelic.

Frederic said: “As Vicky and Liz don't speak Gaelic, my job was to translate materials into Gaelic and then facilitate the children's use of the language in the sessions. I was glad to be able to contribute to the planning and running of the activities with both of them, and their prior experience with the award scheme was invaluable. The activities were very fun and hands-on, but educational at the same time, which is a great balance to achieve!

“The use of Gaelic in this area was a challenge for me, because obviously a lot of the relevant vocabulary was highly specialised and thus outwith what we had covered in our university classes so far. So, throughout the award scheme, I became a lot more proficient at talking about subjects relating to botany, wildlife and conservation in Gaelic, as well as learning quite a few things about the subjects themselves along the way.”