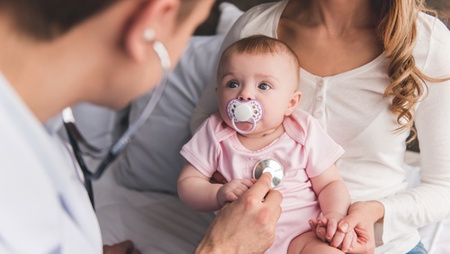 The number of children admitted to hospital as emergency referrals has risen almost 50% in the last decade, but not because more children are getting ill, says the University of Aberdeen team behind new research.

Of the increased number of admissions who were discharged the same day, the vast majority are usually treated with only clear fluids and paracetamol, and this could be done at home.

The researchers suggest that the increase in admissions may be due to a number of factors which include pressure on Emergency Departments to see patients within 4 hours and also the introduction of the out-of-hours service in 2004.

The Royal College of GPs acknowledges that its members could benefit from more training and support in caring for children who are unwell.

The fact that these children are coming all the way into hospital and then being sent home on the same day after receiving treatment they could have got at home suggests that many emergency admissions are potentially avoidable." Professor Steve Turner

“The fact that these children are coming all the way into hospital and then being sent home on the same day after receiving treatment they could have got at home suggests that many emergency admissions are potentially avoidable,” says Professor Steve Turner, a consultant paediatrician at Royal Aberdeen Children’s Hospital and the University of Aberdeen and one of the authors of the paper. “At busy times, children can wait a few hours in the hospital to be seen and when they are finally seen they are clearly well on the road to recovery.”

“There is no evidence that there is an increase of children getting more seriously ill. Indeed, if you subtract the number of children who are admitted and discharged in the same day, the number of admissions overall has dropped slightly.

“This is a big problem and something needs to change because numbers of admissions continue to rise.  Hospital staff are being taken away from other duties to help look after the children being admitted.

“Clearly we all need to provide a safe healthcare service for children, and the paediatric hospital team need to support colleagues in the community.

“There are several options here.  Colleagues working in primary care, emergency department and the out-of-hours service need to have more options open to them other than ‘admit or not’. We could be using facilities such as video conferencing, especially in more remote areas, which could avoid sometimes long and potentially avoidable trips to hospital.  We could offer next day appointments for children who have been unwell for a few days but are not seriously unwell.

“Similarly there is a changing pattern in parents’ health-seeking behaviour for their children. There is a lot of potentially confusing information out there and also scare-stories that mean parents prefer not to take a ‘wait and see’ attitude towards a child’s ill health. If we can better educate parents with clear and easy-to-understand information they may have a clear understanding of when to ask for help and when not to.  Of course we don’t want to put parents off contacting the doctor when they think something is wrong.”

One of the members of the research team, Philip Wilson, University of Aberdeen Professor of Primary Care and Rural Health and a GP in Inverness said “There is also recognition among GPs that their focus on child health has reduced over time as a result of policies aimed at improving the health of older adults.  Furthermore, in many settings Advanced Nurse Practitioners and Physician Associates who have had limited training in child health are now able to refer children to hospital.”