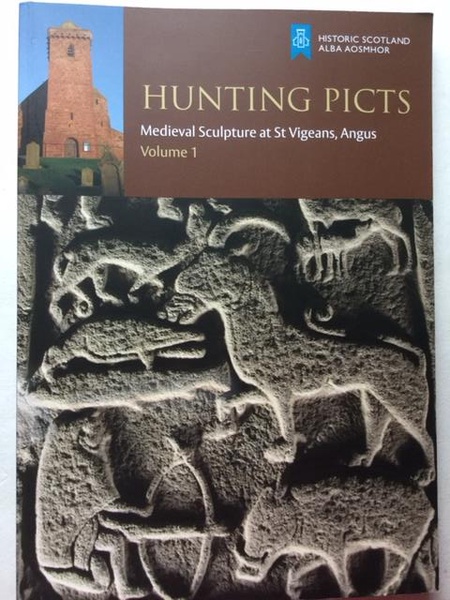 Perched on a steep knoll, hidden by a tight fold of hills, St Vigeans church presents an intriguing site. During restoration in the 1870’s a bewildering collection of exquisitely preserved Pictish sculpture emerged, reused as building material for the later medieval church. This collection, including the Drosten stone, one of Scotland’s premier monuments previously located in the churchyard, is now preserved by Historic Environment Scotland in the adjacent museum. The book firstly explains the discovery of the sculpture and the construction of the church.

Pictish culture lacks its own written documents but here the rich visual imagery on the stones provides a key to interpret the silent past. The interdisciplinary approach of this book allows a vibrant historical context to unfold. Place-name research explains the origin of St Vigean as probably the Pictish name of a 7th-century Irish saint, and populates the locality with the names of Pictish settlements. Geology reveals that stone for a suite of key monuments including a shrine, tomb and Drosten’s cross-slab was specially selected from a distant quarry. The rare example of Pictish epigraphy on Drosten’s stone is shown to be a hybrid of three languages, while the carving on the stone itself is similarly a cultural hybrid, drawing inspiration from many sources.

The sculpture revels in Pictish inventiveness, teeming with animals and humans in many activities. It also draws on a deep knowledge of Christian and classical literature for its iconography, witness to a highly literate and cosmopolitan society. Some stones are sufficiently complete to suggest complex liturgical meanings and functions. Their diverse forms indicate that the carvings were not simply grave markers but served several different monumental roles for the community on the hilltop. Although one of the finest Pictish collections in Scotland (perhaps equalled by that at Meigle) St Vigeans was part of a great contemporary investment in sculpture elsewhere in Angus. The role of Pictish patronage, the driving motivation behind this phenomenon, is considered.

The book is generously illustrated with full plates of the St Vigeans collection and comparative works, and accompanied by a catalogue.