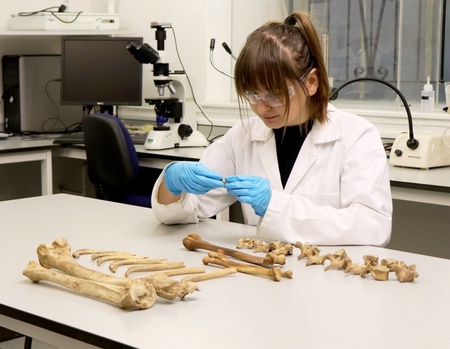 The University of Aberdeen has been awarded £10,000 to showcase how diet in the Granite City has changed throughout the centuries and its impact on the health and nutrition of Aberdonians.

Thanks to National Lottery players, the Heritage Lottery fund grant will enable academics who are investigating the city’s unique resources to share their findings with the public.

The project will bring together analysis of bones dating from Neolithic and Pictish times, Medieval skeletons excavated across the north-east, and the most complete set of Burgh records in Scotland, recognised by Unesco for their historical significance.

Titled Hungry Histories, it will be led by the University’s Public Engagement with Research (PERU) team and Dr Kate Britton, a senior lecturer in the Department of Archaeology. Dr Britton has been investigating diet in Aberdeen through the centuries and how the growth of Aberdeen, North Sea fishing and the commodities trade during the Medieval period transformed Aberdeen socially and economically.

Dr Britton said: “Aberdeen is uniquely placed for this type of investigation. Not only do we have a strong archaeology department at the University of Aberdeen but we are able to draw on resources unrivalled elsewhere in Scotland.

“Recent archaeological excavations, such as those at St. Nicholas Kirk, Aberdeen Art Gallery and the council offices at Marischal College have yielded preserved archaeological biological material – including many human skeletons - dating back across almost 10 centuries. This is an unparalleled opportunity to investigate changes in health, diet and even immigration in Aberdeen over the last thousand years.

“As part of broader projects, our research has utilised the extensive archaeological collections, including those at the Marischal Museum at the University of Aberdeen, which hold bones and other material dating back to the Neolithic period.

“For the last five years, our research has been focused on dietary change in north-east Scotland’s past using archaeological chemistry, with funding from the Royal Society of Edinburgh and the University of Aberdeen’s Northern Picts Project. We now have a full-time PhD student, Orsolya Czére,who is focusing on dietary change in Scotland from the late Iron Age to the Medieval period, funded by the Arts and Humanities Research Council and Historic Environment Scotland. Orsolya will also help co-ordinate our Hungry Histories events.”

Dr Chris Croly from the University’s PERU team said diets offered unique insights into life in the region during a time when it is thought that inhabitants of the city and surrounding areas turned away from a reliance on wild resources, the sea and a diet predominantly of shellfish with the introduction of farming.

“The food consumed by our ancestors not only had a major impact on their health and wellbeing, it was at the heart of the social and political complexities of these times. It’s great to be able to work together with the University’s Department of Archaeology, the City Archives and colleagues in Aberdeen Art Gallery and Museums to bring this research to the public in a variety of different ways. Members of the public will be able to take virtual tours devised by Mercury92, hear talks, and join me and Orsolya on September 29 to taste Medieval Aberdonian food! It’s a great project and all part of the 2017 Year of History, Heritage and Archaeology.”

The virtual exhibition is being devised by Mercury 92, a local design company in Aberdeen. It has been created using a mixture of 360 degree photography, film and 3D, working with Aberdeen PhD student Orsolya Czére. The idea was to have an informative and interactive resource which could allow the general public to visually engage with the history surrounding health and nutrition in the Granite City.

A series of public talks will take place in Aberdeen Maritime Museum and will be free but booking is essential by calling 01224 337714. All talks start at 12.30pm.

This is an unparalleled opportunity to investigate changes in health, diet and even immigration in Aberdeen over the last thousand years." Dr Kate Britton

About the Heritage Lottery Fund

Thanks to National Lottery players, we invest money to help people across the UK explore, enjoy and protect the heritage they care about - from the archaeology under our feet to the historic parks and buildings we love, from precious memories and collections to rare wildlife. www.hlf.org.uk.  Follow us on Twitter, Facebook and Instagram and use #HLFsupported.

Explore the latest research and new evidence from the University of Aberdeen’s Department of Archaeology, including analysis of skeletons from the excavations at Aberdeen Art Gallery, St Nicholas Kirk and Marischal College. Discover how these are revolutionising our understanding of historic diets.

Delve into the pages of the City’s Unesco-recognised Burgh Registers to discover what we can learn about Aberdonian diet through the ages.

Friday September 29
Explorathon
At the University’s annual celebration of research members of the public will be able to meet the team at stalls on St Nicholas Street where they will be able to taste medieval food and learn about what we know, and how we know it, from Aberdeen archaeologists.

Learn about how our modern diet has changed over the centuries and why it matters.

Wednesday November 1
Privies and other filthiness

Explore medieval food production and how waste was treated in medieval Aberdeen. Aberdeen history and archaeology come together to tell a vivid and occasionally smelly story about midden heaps, cows and bread.