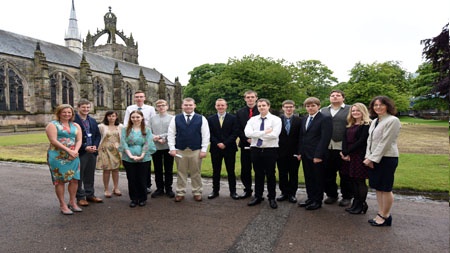 A project which aims to increase the number of people with learning disabilities securing employment held its fourth annual graduation ceremony at the University of Aberdeen last week.

The fourth cohort of interns taking part in Project SEARCH, a collaborative project between the University, North East Scotland College and Inspire, celebrated their achievements with a special ceremony.

The one-year programme sees up to 12 Project SEARCH Interns, who are all registered students with North East Scotland College, spending a month in a classroom environment before embarking on a rotation of three work placements in various roles and departments within the University.

The Aberdeen partners were initially selected to carry out the project in Session 2013/14 by the Scottish Consortium for Learning Disability (SCLD) which oversees the initiative in Scotland.  The programme is supported by Skills Development Scotland and also by Aberdeen City Council and Aberdeenshire Council, who have funded some of the programme’s resources.

Professor Margaret Ross, Vice Principal at the University of Aberdeen, hosted the ceremony and said: “It was an honour and a privilege to have been invited to host the Project SEARCH graduation ceremony and to celebrate our inspirational Interns’ achievements with them and with their families.  I am delighted that 25 Project SEARCH graduates are now in employment in a variety of organisations across the local area and I wish our Class of 2016/17 every success in their future careers.”

It was an honour and a privilege to have been invited to host the Project SEARCH graduation ceremony and to celebrate our inspirational Interns' achievements with them and with their families." Professor Margaret Ross

The keynote speaker, Maura Lynch, Deputy Chief Executive of the Scottish Consortium for Learning Disability (SCLD), spoke of her ongoing successful relationship with the Project SEARCH team, highlighting in particular the joint event which took place in May to celebrate Scotland’s first National Learning Disability Week.

She commented: “The Scottish Commission for Learning Disability congratulates the Aberdeen Project SEARCH site on another successful student graduation. At a time when only 7% of people with a learning disability in Scotland are in employment, the Scottish Project SEARCH sites have a 73.8%.success rate of students into employment in the year 2016. This is a tremendous achievement and leads the way in youth employment in Scotland. The Aberdeen site led by the University of Aberdeen demonstrates the power of partnership working and has positively changed the lives of young people with a learning disability.”

In closing the ceremony, Sean Diack delivered a heartfelt vote of thanks to all members of the team on behalf of the graduating Interns.