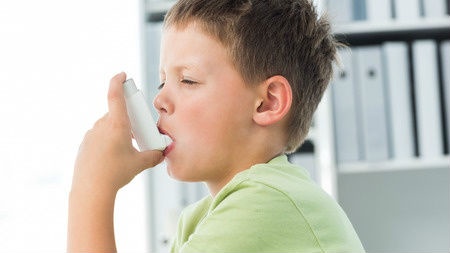 Researchers at the University of Aberdeen will study whether using an asthma breathing test can help prevent asthma attacks in children.

The study will use a breath test which monitors their nitric oxide levels to help guide their asthma treatment.

The researchers have been awarded funding by an NIHR and MRC partnership to investigate.

Everybody produces nitric oxide (NO) but people who have asthma produce more of it.

Doctors have previously measured asthma sufferers’ NO levels to establish if they need more or less medication, but found that NO measurement was not useful.

However, Dr Steve Turner, from the University of Aberdeen, who is leading the new study, says there was a lack of understanding of what constitutes a significant change in NO level.

Following a review of 150 cases, Dr Turner and colleagues found that the range of NO levels of people with asthma was far wider than previously thought.

We've always known that nitric oxide levels were important but we didn't know just how wide the range of levels could be until now." Dr Steve Turner

Using this data, Dr Turner has drawn up new recommendations for what should be considered a ‘significant’ change in NO level.

At the end of the study, the researchers will compare the two groups of children and see how many asthma attacks they have had.  This will show whether measuring NO in children with asthma can help prevent asthma attacks.

“We’ve always known that nitric oxide levels were important but we didn’t know just how wide the range of NO levels could be,” explains Dr Turner.

“We’ve analysed the data from previous studies and we think we’ve come up with a robust definition of what constitutes a significant change in NO level for an individual patient.

“This study will use our new definition of NO level changes, along with close monitoring of the amount of treatment each patient is using in order to accurately show if their asthma requires more or less medication.”

The study was funded by an MRC and NIHR partnership created to support the evaluation of interventions with potential to make a step-change in the promotion of health, treatment of disease and improvement of rehabilitation or long-term care.

1.      The National Institute for Health Research (NIHR): improving the health and wealth of the nation through research.

Established by the Department of Health, NIHR:

       works with the life sciences industry and charities to benefit all

       involves patients and the public at every step

2.      The Medical Research Council is at the forefront of scientific discovery to improve human health. Founded in 1913 to tackle tuberculosis, the MRC now invests taxpayers’ money in some of the best medical research in the world across every area of health. Thirty-one MRC-funded researchers have won Nobel prizes in a wide range of disciplines, and MRC scientists have been behind such diverse discoveries as vitamins, the structure of DNA and the link between smoking and cancer, as well as achievements such as pioneering the use of randomised controlled trials, the invention of MRI scanning, and the development of a group of antibodies used in the making of some of the most successful drugs ever developed. Today, MRC-funded scientists tackle some of the greatest health problems facing humanity in the 21st century, from the rising tide of chronic diseases associated with ageing to the threats posed by rapidly mutating micro-organisms. www.mrc.ac.uk