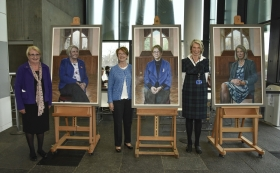 Portraits of three of the University's female Vice-Principals were unveiled on Wednesday 28 March 2017.

Maggie Milne has exhibited widely in galleries throughout the UK, including the National Portrait Gallery, the Mall galleries, the County Hall Gallery in London, the Royal Glasgow institute and the Royal Scottish Academy.

The portraits were commissioned to celebrate the achievements of these three women and address the gender balance of the portraits around campus.