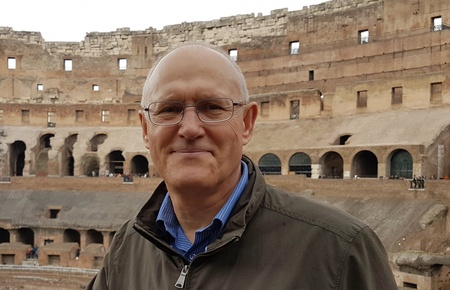 A leading academic from the University of Aberdeen's School of Engineering has been honoured with a prestigious award in recognition of his work in the field of environmental fluid mechanics.

Professor Vladimir Nikora has been awarded the Hans Albert Einstein Award from the American Society of Civil Engineers (ASCE), which he will collect at a ceremony in California later this year.

The internationally-recognised award is named in honour of Albert Einstein’s son, who became famous in his own right for his pioneering research on turbulent flows and sediment transport, which relates to the movement of solid particles such as sand and rock in fluid - an area in which Professor Nikora specialises.

Citing Professor Nikora’s ‘outstanding theoretical and experimental contributions to the engineering profession in the field of cohesive sediment transport, turbulence structure, and alluvial river mechanics’, the Award Committee noted that ‘his fundamental approach to sediment transport processes has been compared to Hans Albert Einstein’s work in this area.’

This recognition largely reflects the work of my PhD students, postdocs, and collaborators, as well as the strong support I recieve from the School of Engineering and the University" Professor Vladimir Nikora

Commenting on the award, Professor Nikora, who is Leader of the Fluids and Structures Research Group at the School of Engineering, said:

“I am very pleased to be selected for this prestigious award which is named in honor of Hans Albert Einstein. His contributions to fluvial hydraulics were as significant as contributions to physics of his great father.

“This recognition largely reflects the work of my PhD students, postdocs, and collaborators and of course the strong support I receive from the School of Engineering and the University.”