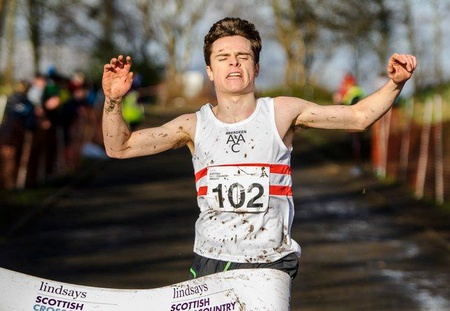 A University of Aberdeen student is set to represent his country after running the race of his life at the Scottish Under-20 Cross Country Championships.

Broc Drury, a 3rd year Biological Studies student, became the first runner in the history of Aberdeen Athletics Club (AAC) to win the event, which took place in Falkirk.

Broc, who receives assistance from the University through its sports bursary scheme, is now preparing to represent Scotland at the Home Countries International Cross Country match in Wales next weekend.

His victory in Falkirk and selection for the national cross country squad represents an upturn in fortunes for the 20-year-old, whose biggest win to date was a bronze medal at the Scottish National 5000m Championships last summer.

“Winning in Falkirk counts as my proudest ever sporting moment,” he said.  “I have never won gold before, not at any sort of high level, so running out in front for the final lap was a rather surreal experience.

“Running for Scotland next week will be one of the biggest honours of my life so far, and no matter what happens I know it will be amazing.”

Broc’s journey to national success began as a ten year old growing up in the Scottish Borders, when he took part in his first competitive run.  But it was only after his arrival in Aberdeen that he began to compete in earnest, joining AAC in late 2015 and entering his first major event cross country event last year.

Despite a number of injury setbacks Broc has gone from strength to strength, taking part in a number of big races while balancing training, competition, and the demands of life at University.

Running for Scotland will be one of the biggest honours of my life so far, and no matter what happens I know it will be amazing" Broc Drury

“My coursework is tough, and if I’m not working part-time or carrying out my duties as President of Aberdeen University Triathletes then I’m training,” he explained.

“Thankfully the University has given me outstanding support, not only through the sports bursary scheme but also through strength and conditioning training, and access to physiotherapy treatment.

“Along with all of the encouragement I have received every step of the way, you really feel like there is a wealth of support in developing yourself as an athlete here at Aberdeen.”

With the prospect of his involvement in the Scottish cross country squad just over a week away, Broc admits that he never expected to come this far in such a short space of time.  However, he is determined to build on the solid foundations he has built for himself.

“Last year my ultimate goal was to run for Scotland and I never dreamed I would get to where I am now,” he said.

“I am still to finalise my summer plan, but my confidence is high and I’m hoping to battle it out at national events, in particular the BUCS Outdoor Championships and National 5000m Track Championship which take place later this year.

“I don’t want to burden myself with too much expectation though, so my main priorities are to keep training, keep pushing and never put a limit on what I can achieve.”