Pioneering scientist recognised for a 'life in colour'
15 March 2017 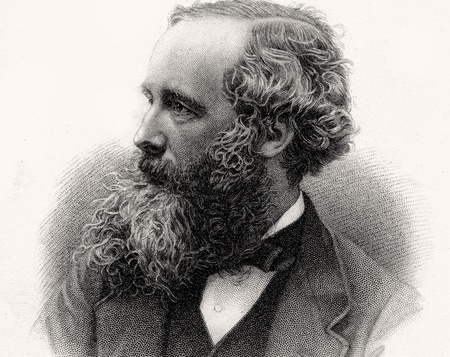 A University of Aberdeen scientist who made huge advances in molecular physics, laid the foundations for many of today's communications technologies and presented the first colour photograph to the world will be recognised by the City.

James Clerk Maxwell (1831-1879) is credited as ‘one of the greatest scientists who ever lived’ and is acclaimed as the ‘father of modern physics’.

He began his professorial career aged just 25 at Marischal College, now part of the University of Aberdeen, and his later discoveries in the field of electromagnetism laid the foundations for many of the technologies we use today, including television and mobile phones.

His life and achievements will be commemorated with a new blue plaque sponsored by the Institute of Physics, which will be unveiled in Marischal College on Wednesday March 15 by the Astronomer Royal for Scotland, Professor John Brown. Nobel prize-winning scientist Peter Higgs, who gave his name to the Higgs boson "god particle" will also speak in tribute to Clerk Maxwell. The plaque will then be placed outside the 129-131 Union Street building in which he lived.

The public can also learn more about the pioneering work of Maxwell at a free Café Scientifique event organised by the University of Aberdeen and presented by Professor Brown at 7pm.

Upon his arrival in Aberdeen in 1856, Maxwell began to study in-depth the composition of Saturn's rings. For many years, scientists had been trying to understand why they did not simply break up, crash into or move away from the planet.

Maxwell concluded the rings comprised a myriad of small solid particles. The Voyager space probes of the 1980s confirmed many of the conclusions drawn by Clerk Maxwell over a century before.

During his time at Marischal College, Maxwell also made huge advances in molecular physics, which laid the foundations of the modern treatment of the properties of gases and resulted in him being called the ‘leading molecular scientist’ of his day.

He announced his findings at the British Association meeting held in Aberdeen in 1859 for which the Music Hall in Union Street was specially built.

While at Aberdeen, he gave a weekly, free lecture at a working men’s college and also married Katherine Mary Dewar, the daughter of the University’s principal.

Maxwell left the city in 1860 to become Professor of Natural Philosophy at King’s College, London but his influence continued to be felt. He had already demonstrated how to measure colour and that each colour is not unique but can be made by a combination of three primary colours through spinning of variable colour sectors. This discovery enabled him to identify ‘colour blindness’ and he realised that the defect could be measured through colour-mixing experiments using his colour box, made by Smith & Ramage of Aberdeen.

James Clerk Maxwell made fundamental contributions to mathematics, astronomy and engineering. Think of colour photographs, colour film, colour printing and you'll find that the basic quantitative science underlying these processes was discovered by Maxwell during his time at Aberdeen. " Professor Sir Ian Diamond

Throughout the 1860s, Maxwell also made significant progress in understanding the nature of electromagnetic waves and his discoveries form the basis for much of the modern technological society we take for granted. Radio, television, satellite communications and the mobile phone have their origins in his work.

In 1871 he took up post as the first Professor of Experimental Physics at Cambridge University where he went on to help set up the Cavendish research laboratory. Maxwell died of cancer in 1879 at the age of just 48.

The Lord Provost of Aberdeen George Adam said: “James Clerk Maxwell’s years in Aberdeen were a significant time in his life and his work is part of the city’s rich history of academic research and innovation.  The city is full of stories about people who have made significant contributions to the way we think about the world around us, and we still see it today in the entrepreneurial spirit of people and businesses across Aberdeen.”

Professor Sir Ian Diamond, Principal and Vice-Chancellor of the University of Aberdeen, said: “James Clerk Maxwell made fundamental contributions to mathematics, astronomy and engineering. Think of colour photographs, colour film, colour printing and you’ll find that the basic quantitative science underlying these processes was discovered by Maxwell during his time at Aberdeen.

“His work on electromagnetic waves also underpins much of today’s communication technology from TV and radio to mobile phones. It is fitting that a new plaque is erected in Clerk Maxwell’s honour and to commemorate this great physicist’s time in the city.”

Professor John Brown, OBE, Professor Emeritus Glasgow University and Honorary Professor in the Universities of Edinburgh and Aberdeen, where he taught Honours Stellar Physics for many years said: “I am delighted to be asked to unveil a new plaque in honour of one of Scotland’s greatest physicists in the city where he pioneered so much important research.”

Professor Peter Higgs added: “I am pleased to see this tribute in Aberdeen to James Clerk Maxwell whose endeavours in so many areas of physics has contributed so much to our present day understanding of the way in which nature behaves. For example, almost all of the modern technology that we take for granted would not have been possible without his electromagnetic theory. His electromagnetic equations were the foundation on which was built modern quantum field theories.”

The free Café Scientifique event dedicated to Maxwell will take place at 7pm on Wednesday March 15 in Waterstones Union Bridge branch. Booking is not required. For more details visit www.engagingaberdeen.co.uk