My Heart Will Row On: students channel 'inner Celine Dion' ahead of Aberdeen Boat Race
01 March 2017 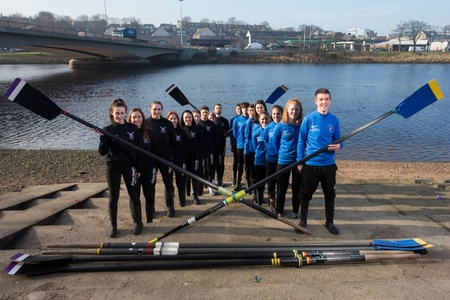 Rival students in Aberdeen have set aside their differences ahead of one of the city's top sporting events to record a parody of Celine Dion's classic power ballad, "My Heart Will Go On".

Rowers from the University of Aberdeen and Robert Gordon University created the video – “My Heart Will Row On” – to encourage spectators down to the riverside to watch the 22nd annual Aberdeen Boat Race, sponsored by Aberdeen Asset Management, on Saturday, March 4.

Recreating famous scenes from the James Cameron epic Titanic, the students proved they were kings of the world as “Jack” and “Rose” discovered their blossoming love – despite the universities’ rivalry on the water.

The video allowed the wider student bodies to engage with the boat race, including the University of Aberdeen Music Department, and follows last year’s “Rowing on the Dee” – a take on Adele’s “Rolling in the Deep” – which was shared thousands of times online before the race.

University is about more than just exams. While final grades are undoubtedly important, the university experience is also about a willingness to try new things, learn new skills and express creativity." Martin Gilbert

The Aberdeen Boat Race will see the University of Aberdeen attempt to reclaim the title after a five-year winning streak from Robert Gordon University (RGU). In 2016, RGU won by just a quarter of a length in the closest race yet – with both crews smashing the course record.

Following the toss for stations at 3.20pm, a number of races will take place in the run up to the title event. The Universities’ Second Crew Race takes place at 4.05pm, while the Alumni Crews take to the water at 4.25pm. The Media Challenge – which will see the Evening Express and Original 106fm take on reigning champions BBC, takes place at 5.15pm before the main Aberdeen Boat Race at 5.30pm.

The Aberdeen Boat Race continues into its 22nd year with the continued support from global financial firm Aberdeen Asset Management. Chief executive Martin Gilbert, says: “University is about more than just exams. While final grades are undoubtedly important, the university experience is also about a willingness to try new things, learn new skills and express creativity – qualities which postgraduate employers find incredibly valuable in all industries. It is fantastic to see the boat clubs working with students throughout the universities to bring together such a creative video to attract spectators to the river on March 4.”