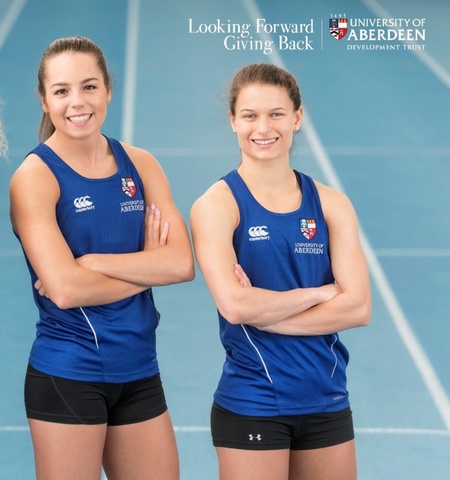 Purchasing equipment, covering travel expenses, paying entry fees to competitions, and qualifications for coaches – the expenses pile up for sports clubs. To enhance the student experience and make sports clubs more accessible a number of groups have been financially supported by the Student Fund. Learn more about how the Yoga Club, the All-Round Fighting Club, the Trampoline Club, the Aberdeen University Athletics Club, and the Golf Club have hit it out of the ballpark this past year.

The University’s Yoga Club has made it their priority to promote mental health and slow practices to our student population. To do that, they offer free yoga mats for their members to use during the lessons. As the mats that have previously been used are by now worn out, the funding they received from the Student Fund has been used to buy replacement and better-quality ones to ensure their classes can be accessible to all.

The All-Round Fighting Club has also used its funding to purchase new training mats and dummies which have significantly improved the quality of their training. The dummies especially have been used in various training units and many members have said that they present a more well-rounded and easier approach to learning new techniques. More advanced fighters have also benefited from the purchase, as the equipment is similar to that found in professional gyms. The Club sees the mats and dummies as a long-term investment enhancing the training facilities overall, as all other martial arts and fighting clubs will also be able to use them.

At the start of last year, the Trampoline Club was largely relying on external coaches to ensure that they had someone with the appropriate qualifications present, resulting in irregular training times for their members. With the help of the funding, they could encourage members to become coaches by taking the financial pressure off those who may not have been in a position to pay for the coaching courses on their own. Five members in total were able to undertake the coaching courses to provide a secure future for the Club.

The Aberdeen University Athletics Club has also been able to provide higher standards of coaching by sending its coaches to professional courses. Additionally, as one of the furthest travelling clubs in the UK, they used their funding from the Student Fund to subsidise travel costs, which has improved access to competitions for all members. The funding has been a huge support, particularly in light of rising fuel prices, and allowed them to travel to competitions across the country, including driving two minibuses down to London for the BUCS cross-country races. Zoe Bates, the Club’s Treasurer, described the trip down to London as a “fantastic opportunity to compete against other universities in the UK and experience one of the most exciting and well-attended cross-country events of the year”.

The Aberdeen University Golf Club also competed at the top of Scottish university sports. They attended the Scottish Student Golf Championship in Lossiemouth using their funding to cover entry fees. Competitions and tournaments like this give club members real development opportunity as well as the chance to play some of the best golf courses in Scotland. The University of Aberdeen Golf Club showed their competitive edge, with one of their members making the cut and getting through to the final day of the championship.

Learn more about how the Student Fund enhances the student experience here: www.abdn.ac.uk/giving/student-experience-fund

Published by The Development Trust, University of Aberdeen