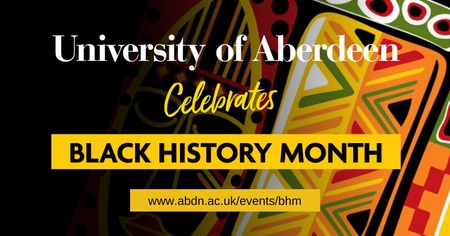 Black History Month is observed annually in the UK from 01 October – 31 October. This is an opportunity for individuals and organisations alike to mark the contribution of black people to the UK. In recognition of this impact as well as in celebration of the University’s 525th anniversary, a fully online programme of events and online resources was designed to mark UK Black History Month and highlight the University’s historic and current links with black history and culture during October 2020.

The University took a fully collaborative approach to the event and as part of the planning process a brand new working group was established, comprising of both staff and student representatives, such as the AUSA Communities Officer and BAME forum. This group facilitated a partnership across departments and groups within the University and allowed for cross-promotion of events and online activities.

Over the month of October 2020, 12 events were held in addition to online resources which were made available on the University website. All events were free to attend and were open to the public as well as internal University audiences. Based on feedback gathered by the AUSA Communities Officer and BAME networks, the festival took on a celebratory feel, celebrating black culture and the impact that people of Afro-Caribbean descent have made to the UK and globally. It was the University’s first Black History Month Festival and offered a variety of events including talks, workshops, music events and podcasts which appealed to a variety of audiences and interests.

Across the 12 events there was a total of 452 trackable audience interactions. A bespoke feedback form was issued to everyone who had registered for the events inviting them to provide comments and 74 responders provided feedback which detailed their experiences of the individual event(s) as well as their impression of the Black History Month offering from the University in general.

Electronic marketing has consistently been identified as one of the most impactful means of marketing events with 38% of responses identifying social media the main resources for learning about events. The University website was also identified as a key source of information with 23% of responses identifying it as the place they usually visit to find out about events. Other sources included ezines or direct emails from the University.

When asked to rate their enjoyment of events, 88% of responses found events ‘fairly to very enjoyable’. The ‘In Conversation with Professor Chris Jackson’ event was identified by 20% of responders as their ‘most enjoyed’ event. This was an evening discussion and Q&A session with the academic who is best known for his work on Basin Analysis and who will appear as the first black scientist to deliver the Royal Institute’s prestigious Christmas Lecture. Other events which were identified as ‘most enjoyed’ by respondents included ‘Centering Race in International Law’, ‘A Discussion: Underrepresentation of Black and Ethnic Minority Women in Scottish Politics’, ‘Charles Heddle: An Afro-Scottish trader and the abolition of the slave trade in Sierra Leone’ and ‘Samuel Coleridge-Taylor - Music, Life, Legacy’.

Analysis of the Black History Month social posts, across the main University social media accounts on Facebook, Twitter, LinkedIn and Instagram, revealed an overall reach of 330,000. This resulted in 5,000 total engagements including likes, shares and comments on posts. ‘Story’ posting was also utilised in order to create a more interactive and heavier posting schedule while reducing the risk of overly diluting general feeds. On average stories reached between 4,000 – 6,000 unique users. As a result of the promotion of the Black History Month programme a total of 2,657 landing pageviews were logged from 27 September to date, with 1,880 unique pageviews and an average time spent on the page of 3 minutes and 10 seconds.

When asked to reflect on their level of satisfaction around how the University marked Black History Month in 2020, a total of 83% of people ‘felt satisfied’ with this with no responses which identified that they were ‘dissatisfied’ with how Black History Month was celebrated at the University of Aberdeen. Further to this 63% of responses noted that they felt that the Black History Month events were representative. Diversity and inclusion were identified as the most requested themes for future events from respondents, with history, and social and academic research also being identified as areas of interest. Specific feedback included:

“Well done and thank you for organising these events. I look forward to having similar events throughout the year and not just in October.”

“The events [I] attended were well-prepared and skilfully moderated. I appreciated the worthwhile efforts of both the presenters and the moderators.”

“Very high academic standard but [was] fully explained to suit any audience.”

While most of the respondents were based in Scotland, the events also reached audiences in Nigeria, Canada, North America, Indonesia and Australia.

The Aberdeen 2040 Strategy aims to continue to highlight the University of Aberdeen as ‘open to all and dedicated to the pursuit of truth in the service of others’ while setting out a clear direction of how the University will move forward on the local and global stage. The Black History Month Festival met key areas of the Strategy by being ‘inclusive’, ‘interdisciplinary’, ‘international’ and ‘sustainable’.

In conclusion, 2020 brought about a number of changes for the University of Aberdeen and our global connections. Marking the 525th anniversary of the University while moving to home working, striving to support our communities and stakeholders as well as making efforts to aid the fight against Covid-19 and acknowledging and addressing the social impact of the Black Lives Matters movements, has been a significant challenge to the whole University community. The overwhelmingly positive response to the Black History Month Festival and the continuing commitment to strive to make University of Aberdeen as inclusive as possible while recognising and celebrating the diversity of our community, illustrates the further potential for the University to continue to use its platform to be a positive force for change and a welcoming organisation which is truly ‘open to all’.

Published by The Development Trust, University of Aberdeen