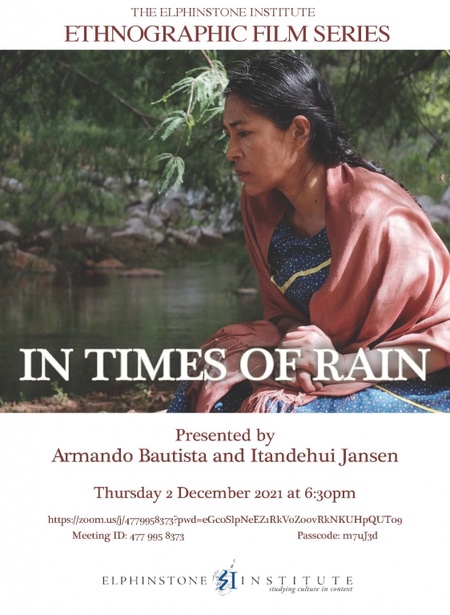 In Times of Rain (2018, 90 mins) A powerful story of economic migration between rural and urban Mexico. Soledad is a matriarch and traditional healer whose daughter Adele left their village to work in Mexico City leaving behind her infant son. Years later, Soledad and her grandson Jose share a strong bond rooted in their love of culture and land. As she continues to pass on her knowledge and teachings to him, she receives an unexpected call that her daughter is getting married and intends for Jose to join them in the city. Fearing an uncertain future for them both, Soledad struggles to cope with her impending heartbreak as she awaits her daughter’s return.

Itandehui Jansen (Oaxaca, Mexico 1976) studied film directing at the Netherlands Film and Television Academy in Amsterdam. She has participated in different selective international training programs, such as the Berlinale Talents. Her documentaries and short films screened at international festivals such as the IDFA (International Documentary Film Festival Amsterdam), The Morelia International Film Festival and DC Shorts. Her short film The Last Council won several international awards and was nominated for the Mexican Film Critics Award Diosa de Plata. At present she is an Assistant Professor at the University of Edinburgh.

After studying an MA in Philosophy at the Autonomous University of Barcelona with a FORD FOUNDATION fellowship, Armando Bautista started writing and producing films. He received different grants by the Mexican Nacional Council for Arts and Culture (CONACULTA) to write theatre plays, children stories and film scripts. He was the main producer for the micro-budget feature drama film, In Times of Rain, which recently won the award for Best Emerging Feature at the Oaxaca FilmFest.

Presented by and followed by Q&A with the film makers