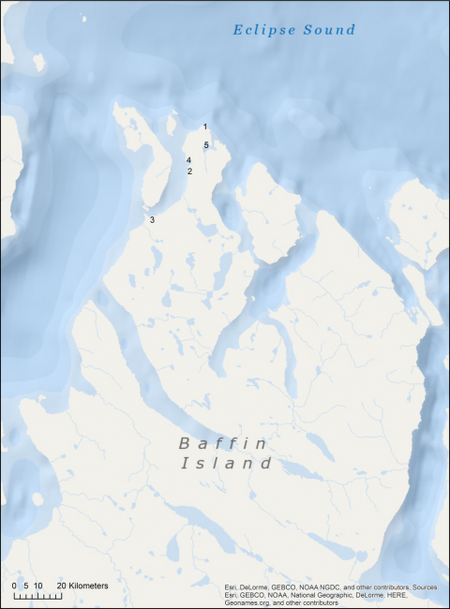 This recent study by Professor Frithjof C. Küpper at Oceanlab and others constitutes an important seaweed biodiversity baseline dataset of northern Baffin Island, a region affected by rapid climate change.

The value of the study is augmented by applying the Germling Emergence Method, resulting in the detection of several macroscopically hitherto inaccessible taxa, including a previously unsequenced Desmarestia.

Global climate change is expected to alter the polar bioregions faster than any other marine environment. This study assesses the biodiversity of seaweeds and associated eukaryotic pathogens of an established study site in northern Baffin Island (72° N), providing a baseline inventory for future work assessing impacts of the currently ongoing changes in the Arctic marine environment. A total of 33 Phaeophyceae, 24 Rhodophyceae, 2 Chlorophyceae, 12 Ulvophyceae, 1 Trebouxiophyceae, and 1 Dinophyceae are reported, based on collections of an expedition to the area in 2009, complemented by unpublished records of Robert T. Wilce and the first-ever photographic documentation of the phytobenthos of the American Arctic. Molecular barcoding of isolates raised from incubated substratum samples revealed the presence of 20 species of brown seaweeds, including gametophytes of kelp and of a previously unsequenced Desmarestia closely related to D. viridis, two species of Pylaiella, the kelp endophyte Laminariocolax aecidioides and 11 previously unsequenced species of the Ectocarpales, highlighting the necessity to include molecular techniques for fully unraveling cryptic algal diversity. This study also includes the first records of Eurychasma dicksonii, a eukaryotic pathogen affecting seaweeds, from the American Arctic. Overall, this study provides both the most accurate inventory of seaweed diversity of the northern Baffin Island region to date and can be used as an important basis to understand diversity changes with climate change.

In the Arctic and Antarctic bioregions, average temperatures are expected to rise by as much as 5°C until the end of the 21st century, twice more than the global mean (IPCC 2014). Recent decades have seen massive loss of Arctic sea ice, combined with rising sea surface temperature in the ice-free areas in the summer – accelerating over the last decade to a loss exceeding 2 million km2 with a new minimum reached in 2012 (Parkinson and Comiso 2013, Kwok 2015) which is unprecedented for the last 1,450 years at least (Kinnard et al. 2011). The disappearance of Arctic summer sea ice is considered a critical tipping element for the global environment (Lenton et al. 2008) and contrasts the development in the Antarctic (Turner and Overland 2009). The transition from a high-albedo sea ice surface to an open sea, absorbing most of the solar irradiance, is also a major factor amplifying warming in the Arctic (Serreze and Barry 2011). A recent study (Halfar et al. 2013) provided a high-resolution, multi-century time series documenting the decline of Arctic sea ice, using the buildup of coralline red algae as proxy. This development may have far-reaching environmental, political, and socio-economic impacts for the Arctic and the entire world (Hassol 2004), including the opening of new, trans-Arctic shipping routes (Smith and Stephenson 2013) and major ecological consequences both in the sea and on land (Post et al. 2013). Sea ice (with variable snow cover) creates a spatially and seasonally very heterogeneous light environment for the light-limited Arctic shallow benthic ecosystems at the underside of the ice (Glud et al. 2007).

With thanks to the Journal of Phycology, published by John Wiley and Sons on 7 July, 2016.