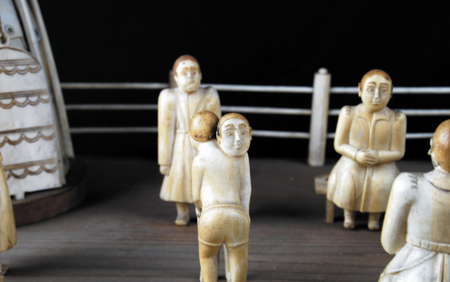 The Narrative Objects research team in collaboration with the National Art Museum have found the model's carver. All thanks to a chance visit to Saint Petersburg.

The Sakha people form one of Siberia's indigenous communities. They live in the Republic of Sakha (Yakutia), in Russia's Far East. They are the inheritors of a long shamanic tradition, although Russian colonisation brought first Christianization, and then the forced secularization of the Soviet era. As part of this tradition, they have continued to feed deities and area spirits at Ysyakh rituals, during the summer solstice.

“Model of a Summer Camp”, a model carved in mammoth ivory by an unknown artist, and now in the collection of the British Museum, depicts a scene from an Ysyakh and is the earliest known representation of this festival. Although it is regarded as a quintessentially Sakha work, few Sakha people have engaged directly with the model and it is not normally on public display.

We now know who carved the Model of the Summer Camp, thanks to a chance visit to the Russian Ethnographic Museum in Saint Petersburg!

Eleanor Peers was at a conference in Saint Petersburg, and just had time to pop into the Russian Ethnographic Museum's permanent exhibition. Museum Curator Marina Fyoderova showed Eleanor another nineteenth-century Sakha model. It shows a Sakha farmyard, with cottages, a horse, and a cow byre. And inside the house sits a man - with exactly the same face, expression and clothing as the men in Model of a Summer Camp!

Efrosiniya Nagovitsyna at the National Art Museum has found a receipt showing that the Sakha farmyard was carved by one Nikolai Belousov, from the village of Khamagatta in Nam region, just north of Yakutsk. The figures in the carvings are so similar that Belousov must also have carved the Model of a Summer Camp.