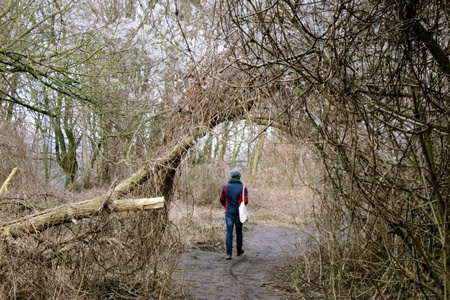 An Aberdeen student has created a sound and light installation linking the tranquility of a Scottish woodland with the hustle and bustle of the inner-city as part of a residency with the RSPB.

The work of Luca Nasciuti, a composer, curator and artist who is studying for a PhD in Music at the University of Aberdeen, will be used to launch the 2016 Wildfest in Glasgow, a month-long festival celebrating urban green spaces and biodiversity which gets underway on Saturday (September 3).

Luca has undertaken a residency at the RSPB’s Inversnaid reserve on the banks of Loch Lomond as part of a project by the Scottish Graduate School for Arts and Humanities where PhD students team up with different organisations to develop new work.

Over eight months he has created two sound installations and the first will be unveiled at Glasgow’s Kelvingrove Art Gallery and Museum on Saturday to mark the start of Wildfest with the second to be heard on the Upland Trail at RSPB Scotland Inversnaid on September 10.

Luca said: “The installation in Kelvingrove features a soundscape playing on four speakers, which is sourced from recordings I took along the motorway in Charing Cross. But some of the frequencies have also been filtered out so that what’s left is a high buzz, much like that of insects, and a deep low drone.

“There is also a piece on headphones which people will listen to while in the room. This is an unedited field recording of the woodland in Inversnaid. You put your headphones on and you shut the noise out, as if listening to music while walking down the street. But some of that noise will still be heard and this way people can make a connection between the two sources. They can find similarities between the insects on headphones and the insect-like sounds in the room.

“I hope this work will help people make connections; connections between the places we navigate through on a daily basis and how we perceive this urban ‘noise’. When we tune in we hear things differently. I’d like to think of this work as a fictional environment that can help us understand the spaces we inhabit and relate to.”

Professor Pete Stollery, Professor of Electroacoustic Music and Composition, at the University of Aberdeen added: “This is a great opportunity for Luca to have his research experienced by a wider public, through the sound art he has created for his RSPB residency at Inversnaid. I know the feedback he will get from the public’s reaction to his work will be incredibly useful in the generation of future work.

As part of the launch event, Luca will also be leading sound walks in Kelvingrove Park as part of the Wildfest which include talks, community days, workshops, picnics and opportunities to take part in conservation at sites all over Glasgow.

The festival is a collaborative effort between RSPB Scotland, Glasgow City Council, community groups and gardens and other organisations. It is part of Giving Nature a Home in Glasgow, an RSPB Scotland initiative which aims to re-connect people with Glasgow’s urban green spaces.