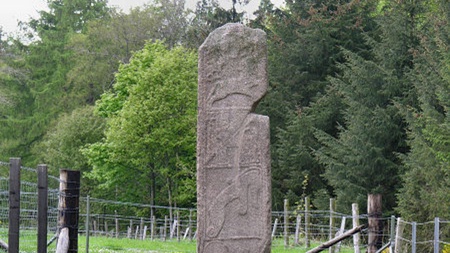 Third-year music student and composer Joe Stollery has won funding from The North theme towards A Maiden Stone - A Site-Specific Opera for Bennachie, a project involving the composition of an opera as well as workshops in schools.

Huntly poet Catriona Yule has supplied the libretto, a new interpretation  of the Maiden Stone legend.

The work will be performed by two Aberdeen alumni, Jillian Bain Christie and Colin Brockie: Jillian will take the part of Marn (the Maiden), singing in Doric, and part of Dirk (the man/devil) will be taken by Colin.

The opera will be performed at various locations on the hill, evoking the legend in its original location through sound, music and drama to the accompaniment of a string quartet, flute and percussion.

The finished opera will include not only music by Joe Stollery, but also material by local school children working with staff in the School of Education which will act as interludes at various points. The children will also have the opportunity to perform, taking the parts of 'bannocks' towards the end of the piece. Each performance will begin at the Bennachie Centre, from where the audience will be led by the flautist on a journey of exploration to the location of the first scene, passing through a variety of sound and visual art interventions provide by the pupils along the way.

The whole project will be featured as part of the Baillies of Bennachie 40th anniversary celebrations, and be part of the sound Festival.