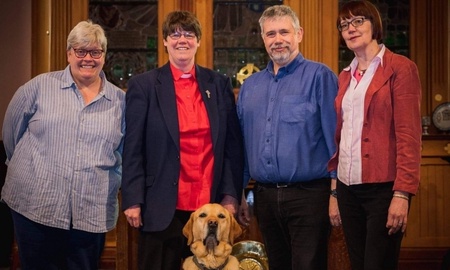 An Aberdeen choir for the deaf and hearing impaired has joined voices from around the world as part of an initiative to unite people in music and to create a charity single.

The Singing Hands Choir, which interprets songs in British sign language, is part of a unique chorus drawn from across the globe to support Scottish singer Fiona Kennedy on the charity release Stronger for the Storm.

Singers and performers around the world were invited to submit their own version of the track, written by Kennedy, royal composer Paul Mealor and lyricist Grahame Davies, and these were then crafted into a charity single and video.

Stronger for the Storm received its premiere over the weekend on Classic FM and on BBC Scotland’s Classics Unwrapped.

The initiative, run by the University of Aberdeen as part of the iSing4Peace project, aimed to bring people together at a time when performing was limited and to raise funds for good causes.

Singing Hands was created by Reverend Mary Whittaker, from Lhanbryde, Moray, who lost her hearing at the age of two, as a way to allow those with hearing impairments to continue to engage with music.

She said: “My sister Anne taught me to read basic music notes and encouraged me to ‘listen’ with my eyes and to sign along with the rhythm.

“My favourite is Handel's Messiah; she would sit next to me and use her finger to follow the score so I can see the words and music with choir, soloists and orchestra at the same time.

“After rediscovering music in a different way, I started to sign songs and I shared this experience with a few people who encouraged me to set up a signing choir.”

Mary said they were delighted to be able to help share Stronger for the Storm in a different way.

“It’s been challenging but a real privilege to be part of iSing4Peace.”

Choir member Doug Leiper, from Aberdeen, said that using British Sign Language enabled Singing Hands to focus on the meanings and emotion of the song.

"Our aim is to give a strong and meaningful visual performance that engages both Deaf and hearing people,” he added.

“iSing4Peace is a fantastic project and I’m delighted to be part of a global choir that reaches out to all".

Anne Whittaker, from Tayport added: "I have loved music for as long as I can Remember. I grew up singing but found in recent years that my singing voice has been going.

“Though this has been a disappointment I have found that signing songs has filled the gap and my hands have become my voice. The impulse is the same: to create and to communicate. It is a joy to be part of the iSing4Peace choir."

Neil McLennan, a senior lecturer in leadership at the University of Aberdeen, founded iSing4Peace, which build on the successful iPlay4Peace initiative which brought musicians around the world together.

He said: “2020 has been a year like no other and we wanted to find a way to reduce isolation and bring people together.

“iSing4Peace has been hugely successful in creating a sense of community – even though everyone who has taken part has done so from their own homes.

“We are delighted that the Singing Hands have joined other singers from around the world to be part of our global chorus. They epitomise the spirit of iSing4Peace and their contribution really adds to the visual impact of Stronger for the Storm in our video to accompany the charity single.”

Stronger for the Storm is available at Bandcamp.com and funds raised will support The British Red Cross, The Royal Commonwealth Ex-Services League (RCEL), VSA and the University of Aberdeen’s Development Trust.