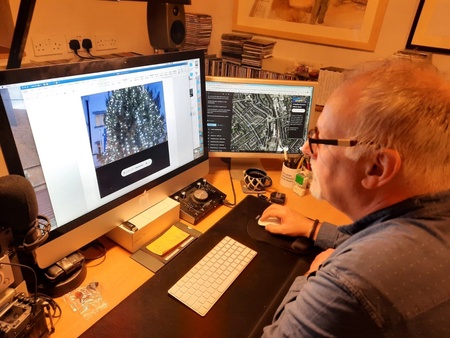 2020 will be a Christmas like no other and a University sound artist is aiming to capture just how different it will be as part of a Covid 19 sound map.

In March the University of Aberdeen’s Professor Pete Stollery launched a project to capture in sound the changes in our environment as a result of the lockdown as a way to preserve and reflect on a unique period in time.

He received hundreds of contributions from 18 countries around the world and is now hoping to expand the map, which uses Google Earth, to capture the changing sounds of the festive period.

Professor Stollery said: “Christmas for most of us is going to look – and sound – very different this year.

“We are unlikely to have the extended family round for dinner or attend carol concerts in person, for example, and I’m interested in how that changes the aural landscape both inside and outside of our homes.”

During lockdown Professor Stollery says the majority of submissions featured sounds people were able to hear that had previously been drowned out by traffic or other noise. For the Festive period, he anticipates that sounds will be altered, as well as more audible, because of a reduction in background interference.

“Around three quarters of the recordings we received during lockdown were sounds they could hear at that point which they hadn’t before. In the UK, this was often birdsong, in other places like Chile and Portugal, it was frogs.

“For the holiday period, a more complex picture is likely to emerge. It may be that people enjoy a Carol Service online rather than in a Church, that the Boxing Day walk is quieter – or busier- than usual, or that city centres are eerily quiet at night without the usual office parties.

“I want examples of how people are hearing things differently, whatever form they take.”

Recordings can be made using a mobile phone or any recording device and uploaded using an online submission form at http://tinyurl.com/covid19soundmapsubmission or by sending the recording directly to covid19soundmap@gmail.com, with a short explanation about how the sound is different from normal and with details of the location of the recording.

Professor Stollery then hopes to use the submissions to create a brand new piece of music at some point in the future.

“While this has been a testing time for us all, it has been interesting to see the difference in the way people have stopped to listen to what’s going on around them,” he added.

“Capturing in sound the changing ways in which we have lived our lives over the last nine months is a unique way to preserve this period for future generations.”