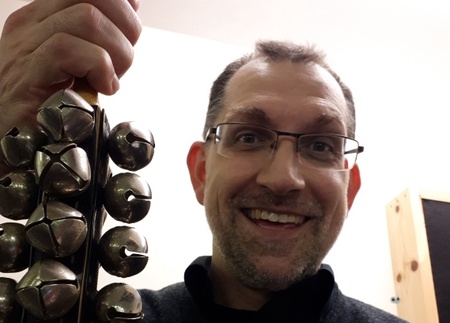 A University of Aberdeen teaching fellow has reached the final of a BBC competition which challenged amateur composers to create a new tune for Paul Laurence Dunbar's poem, 'Christmas Carol'.

Dr Tim Tricker, who teaches English in the School of Language, Literature, Music and Visual Culture, is one of six finalists whittled down from over a thousand entries by an expert panel of judges.

Run by BBC Radio 3, the competition challenged entrants to come up with a suitable melody for the festive poem, and received submissions in every conceivable style and genre.

Dr Tricker, who conducts the Grampian Hospitals' Choir, Grampian Concert Orchestra, and Concordia String Orchestra in his spare time, said he was inspired to enter the competition because it combines three of his passions – poetry, music and Christmas!

As a keen musician who often accompanies students in their singing lessons and recitals, he said the competition offered a new challenge at a time when performing has been severely constrained.

“I conduct the Grampian Hospitals' Choir, and they usually rehearse from October through to December to put on two big charity carol concerts, one in the Town Hall in Elgin, and one in the Music Hall in Aberdeen,” he said.

“Like many musical groups this year, they've had to cancel these concerts, so we've all been missing making music together, and all the preparations involved in the Christmas carol performance process.

“I'd usually be writing and arranging music for Christmas events, so the Radio 3 Carol Competition was a way of continuing to do that.”

Dr Tricker is now hoping that his work will appeal to the public, who will select the winner by voting for ‘the most catchy, singable melody - the earworm that will keep you humming all the way through the festive period’.

“I write, and work with, and teach, poetry, and I like its metrical craft,” he added,

“Musically, I enjoy the challenge of word-painting, and getting the text to sit naturally in terms of a melodic line, so I sent my offering to the competition.

“Hearing that I'd reached the final was a super piece of news - I actually got the call to say I was on the shortlist on my birthday - so it felt like a birthday and Christmas surprise all in one.

“While it would obviously be amazing to win, I’m delighted simply to have made it to the final.”

You can lend Dr Tricker your support by voting at https://www.bbc.co.uk/programmes/articles/4W3pChRzhv8yDG6JF1398FF/radio-3-carol-competition-2020

The winner will be announced during Radio 3’s Breakfast show on Friday 18 December.