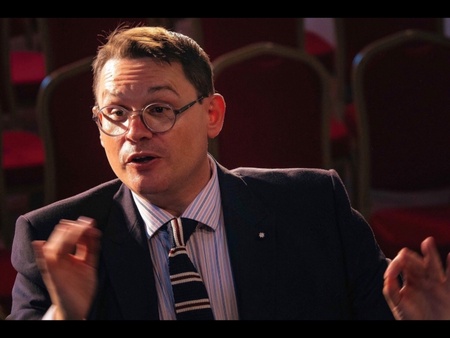 The University of Aberdeen's Professor Paul Mealor has been awarded The Saltire Society's Fletcher of Saltoun Award for outstanding contribution to arts and culture in Scotland.

Professor Mealor, originally from Wales, has made Scotland his home for the last 20 years during which time he has become one of the world’s most performed living composers.

Established in 1988, the Fletcher of Saltoun Awards honour outstanding contributions to Scottish Culture and The Arts, Science and Public Life, celebrating the legacy of Andrew Fletcher of Saltoun, a seventeenth century Scottish writer, politician, activist and a keen patron of the Arts during his lifetime.

Professor Mealor, who writes much of his work in Scotland, is only the second composer, after Sir James MacMillan, to receive the award.

A Professor of Composition, he gained international recognition when 2.5 billion people  heard his Motet, Ubi caritas performed by the choirs of Westminster Abbey and Her Majesty’s Chapel Royal at the Royal Wedding Ceremony of His Royal Highness Prince William and Catherine Middleton (now TRH The Duke & Duchess of Cambridge) at Westminster Abbey. It went on to top the Classical singles charts in the USA, UK, Australia, France and New Zealand.

Professor Mealor also broke records by being the first classical composer to hold both the classical and pop chart No 1’s at the same time in December 2011, securing the UK Christmas No 1 with his piece for The Military Wives Choir and Gareth Malone, ‘Wherever You Are’ while topping the Classical Charts for six weeks with his bestselling album, ‘A Tender Light’.

He has composed a number of other works for The Royal Family over the years including an anthem for the Diamond Jubilee of The Queen, a piece for The Prince of Wales’ 65th Birthday and music to mark many national occasions.

His Euphonium Concerto (2017) was commissioned and premiered by David Childs and the Royal Philharmonic Orchestra at the Last Night of the Welsh Proms, 2017, and he composed a special work 'Twilight Falls on Temple View' to mark the 25th birthday of Classic FM and the 10th anniversary of the founding of Dumfries House in August 2017.

His first ’Requiem: The Souls of the Righteous’ was premiered by the National Youth Choir of Scotland and the Royal Scottish National Orchestra, September 2018 in Edinburgh prior to its USA premiere by DCINY at Carnegie Hall, New York on November 11, 2018.

Professor Mealor said: “I am honoured and humbled to receive this prestigious award from my adopted country. The landscape, people and culture of Scotland have been and remain a constant inspiration to me. Thank you, Saltire Society. This really does mean the world to me.”