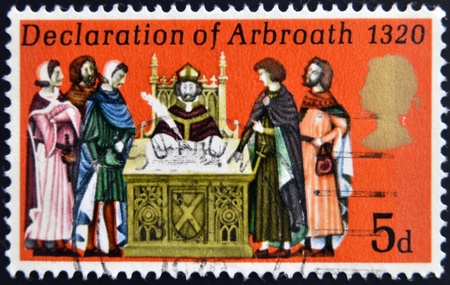 700 years ago today (August 28), the Pope responded to the Declaration of Arbroath, the document attempting to confirm Scotland's status as an independent sovereign state.

A translation of Pope John XXII’s reply will be published for the first time in a new book led by an Aberdeen academic which creates a contemporary ‘people’s history’ of the famous 1320 document.

To mark the anniversary and the arrival of proofs for the publication, titled Conquered by No One, historical reenactors gathered at Arbroath Abbey, where the Declaration is believed to have been formed.

Conquered by No One is a collaboration between more than 50 writers and offers new insights into how the men behind the document – a disparate, at times untrusting and rebellious group of Barons and Earls – were drawn together.

Edited by the University of Aberdeen’s Neil McLennan, it explores for the first time the lives and motives of all 39 signatories of the Declaration looking at their conflicted personal, family, land and wider interests north and south of the border.

Their letter was an appeal to the Pope John XXII to lift the excommunication of Robert the Bruce and recognise him as the rightful king of Scotland.

Papal historian Dr Roger Collins has provided a fresh translation of the response received, which is dated August 28, 1320 while Dr Marie-Luise Ehrenschwendtner, also from the University of Aberdeen, has re-examined the Declaration itself.

Mr McLennan said returning to the original documents was essential when re-evaluating its place in Scotland’s history.

He said: “The 1320 letter is of no significance unless it is responded to so Roger Collins’ new translation is a welcome addition to our understanding of this period.

“Seeing what the Pope said to the Scottish Barons will intrigue many, even if the language is definitely of the era.  It is essentially a call for peace between Scotland and England.  Ironically, willing for peace in the west was motivated by continuing crusades in the east.  Like international affairs of today, the medieval world was complex and connected.”

The declaration itself was originally written in Latin and translated into English in the late 17th century.  It was not until the 19th and 20th century that it was fully assigned the importance it has today.

Conquered by No One provides a revised and fresh translation, paying closer attention to the detail of the wording.  For this, Dr Ehrenschwendtner returned to the original file copy with the seals of each of the Barons, alongside more recent translations.

Mr Mclennan added: “The imperfections of antiquarian translations are well noted.  We hope this new translation will become a version many return to when quoting this often-used historic document.

“While the changes Dr Ehrenschwendtner has identified are not a radical departure from the most commonly used translations, small changes over time do make a difference to reading of the text - word order, what is capitalised and what is not.  These changed over time and altered the overall tone.”

Conquered by No One also reveals greater detail than ever before about the complexity of intentions and aspirations behind this carefully crafted document. Contributors, including Lord Charles Bruce - one of the most prominent living descendants of Robert the Bruce who has written a chapter on his forefather, pieced together the biographies of each Baron to reveal their hidden stories.

“It has been called a ‘Declaration’ in recent times but essentially it was a really a diplomatic letter, a letter espousing democratic ideals and an act of realpolitik perhaps in a complex web of local and geopolitics,” Mr McLennan added.

“There was turbulence between Scotland and England and indeed within Scotland itself.  What is perhaps most striking is that a group of people all agreed to the wording despite being what, as one contributor describes, a ‘motley crew’ ranging from patriots to turncoats with everything in between.

“We are in the fortunate position of having an original file copy to return to for fresh translations but the motivation for keeping a sealed file copy is interesting in its own right.

“It serves to underline that although these men added their seals to the Declaration of Arbroath, they were far from united.  Bruce had kept evidence of the guarantee of their loyalty for good reason.

“Indeed, just a few months later some of those who added their signatures to the document had been tried for their role in treason.  Lord David de Brechin, who didn’t’ plot but knew of the plot and never told anyone, was executed and drawn through the streets of Perth.  William II de Soules was found guilty, and incarcerated in an act of clemency, only to be found dead later in mysterious circumstances.

“Roger de Mowbray’s end was perhaps the most gruesome.  He died in custody before his trial and yet his body was brought before the parliament and made to stand in order to receive judgement and sentencing of being drawn, hung and beheaded!  Bruce did however intervene at the end to allow a decent burial, probably to enhance his own reputation after a merciless coup of dissenters.

“Each nobleman approached the Declaration with very different motivations and viewpoints and 700 years on we have tried to do the same with a reinterpretation led by a broad range of voices drawn from across Scottish life.”