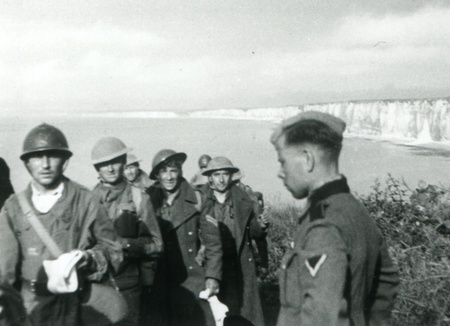 An academic from the University of Aberdeen has played a leading role in organising a piped tribute to the thousands of Scots who were killed or captured during "the forgotten Dunkirk" 80 years ago.

On Friday (June 12), pipers from around the world will together play a tribute to the soldiers of the 51st Highland Division who fought a heroic rearguard action to assist the Dunkirk evacuation, culminating in the battle of Saint-Valéry-en-Caux in 1940.

Neil McLennan, Senior Lecturer and Director of Leadership Programmes at the University and Director of RCET: Scotland’s Armed Forces Children’s Charity, has helped organise the event in conjunction with the charities Legion Scotland and Poppyscotland.

More than 400 pipers from 16 countries across five continents have so far agreed to play the haunting pipers march, Heroes of St Valéry.  Given the level of interest so far, organisers are hoping it could end up being the biggest-ever pipe-playing event in history.

Neil, who has been convening the St Valery 80th Commemorations Committee and is also Director of the Royal Caledonian Education Trust, said: “We have been overwhelmed by the response so far. There are pipers signed up from as far afield as Peru and Singapore, with scores more joining up every day. The world record for the largest ever piping ensemble saw 333 participants at an event in Bulgaria in 2012.

“Due to the global pandemic this will be a virtual rather than physical event, but given the level of interest we have received to date, our hope is that it will be the largest mass playing of the pipes ever.”

Among the prominent pipers is Willie Armstrong, one of the founding members of Celtic rock band The Red Hot Chilli Pipers. Willie, who served in the Royal Navy for four years and is a retired Fire Service Officer, said: “I’m delighted to be involved and it’s amazing to see the global piping community come together for such an important commemoration, especially alongside charities that are very close to my heart.

“Heroes of St Valéry is a tune I’ve been playing for decades. It is going to be incredibly moving to play Donald MacLean’s iconic march exactly 80 years on from when he was captured at the Battle of St Valéry. More than 200 pipers have registered to take part in just over a week, and I’m really hopeful that more will sign up in the coming days.”

Among those taking part are members of the University of Aberdeen UOTC Pipe Band. Regimental Sergeant Major Martin Wear spoke of the impact of the battle on local communities in the north of Scotland.

He said: "The surrender of the 51st wasn't just a military disaster, it affected nearly every Croft, farm, village and town.

“The Highlands had not suffered such a blow since the Battle of the Somme. Some said that the news was greeted like the overwhelming defeat at Flodden in 1513.  St Valery was never forgotten in the memories of those who were there, their families and descendants.

“The memories and Highland traditions of those who came before including the sacrifices made during WW1 by U Company live on today within Aberdeen UOTC.  It is with considerable pride that Aberdeen UOTC's pipers are contributing to this commemoration of their heroic acts.”

Neil McLennan said that the tribute will also include online learning resources for schools and young people, virtual tributes and a fundraising campaign to support the vital work of these important armed forces charities.

He added: “The events at St Valéry in 1940 have never received the level of recognition we believe they should, but we hope this year’s commemoration will put that right and ensure the ‘Forgotten 51st’ are forgotten no more. As we can see, people across the world are moved by the story and want to commemorate together.”