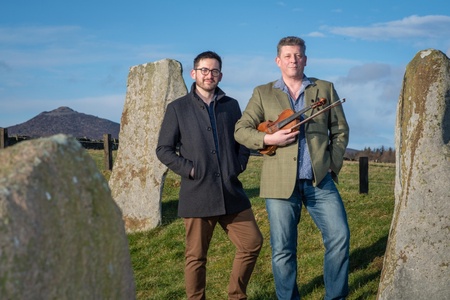 The work of a University of Aberdeen graduate has been selected as the 'Sound of the North-east'.

Former music student Benjamin McMillan has collaborated with Aberdeenshire fiddler Paul Anderson, an honorary research fellow of the University’s Elphinstone Institute, to create ‘The Ballad of Blue, Granite and Green’.

It has been selected as the winning entry in VisitAberdeenshire’s ‘Sound of the North-east’ competition, supported by VisitScotland.

Their ten-minute composition will be used by VisitAberdeenshire in promotional marketing activity, designed to help attract visitors.

The music will also be used in events and campaigns locally, nationally and internationally, and will be made available for the wider tourism sector to use.

‘The Ballad of Blue, Granite and Green’ is broken down into four sections, each inspired by Aberdeen and Aberdeenshire landmarks: ‘Linn o’ Dee’, ‘Bennachie’, ‘Aberdonia’ and ‘Dunnottar.’

The ‘Linn o’ Dee’ segment is designed to evoke a sense of adventure, ‘Bennachie’ represents the region’s rich history, ‘Aberdonia’ embodies the city’s bustle while ‘Dunnottar’ represents the pride of the region.

Benjamin completed a degree in music at the University, graduating with first class honours after taking several years out to work as a chef and to play the piano in London’s Groucho Club.

He returned to the University to complete a Masters in Vocal Composition and was then awarded the Saint Andrew’s Society of the State of New York Scholarship to study at America’s NYU Steinhardt, a specialist institution which has produced alumni including Disney’s most prolific composer Alan Menken, who has worked on films including The Little Mermaid and Beauty and the Beast, and the composer and producer Mark Ronson.

Benjamin has enjoyed other recent musical success producing the score for Connect, a 2019 film which tells the story of a young man’s battle with his mental health. It starred Scottish actor Kevin Guthrie, who also appeared in Sunshine on Leith.

He was also commissioned to produce a piece of organ music for St James The Great, the Scottish Episcopal church in Stonehaven in November.