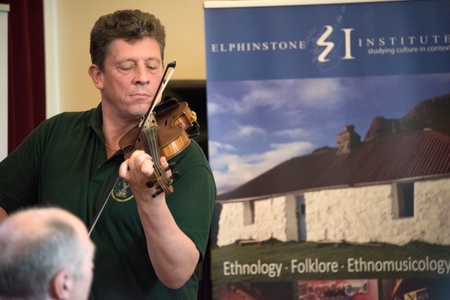 An institute set up to promote and celebrate the culture of the North-East will mark its 25th anniversary on Thursday with an event showcasing the best of the region's creative talent.

The University of Aberdeen’s Elphinstone Institute reaches the milestone having been created in 1995 – when the ancient institution reached its quincentenary – with a remit to sustain and share the renowned traditions of the North-East with the wider world.

Today its Director Tom McKean says the region is on the way to ‘a cultural renaissance’ but that much work is still to be done to ensure North-East language, music, folklore, and heritage has the global status it deserves.

Dr McKean said: “Our music and song cultures have travelled the world, feeding into the Appalachian traditions that mixed with Blues and other African American traditions to give us Rock and Roll. Our stories, skills, and crafts have taken root across the globe. And all this rich culture is underpinned by a unique tongue, Doric/North-East Scots.

“The Institute’s research, degree programmes, and public engagement projects have played a key role in the understanding, development, and promotion of today’s creative North-East, underpinned by these deep roots of history and tradition.

“Our aim has always been to connect people to their place, enhance community bonds, and build bridges, strengthening the very fabric of our society. Tourism, economic growth, and population retention will follow.

“Ultimately, the Institute and the University must play a prominent role in building stronger communities, supporting cultural self-esteem, and encouraging cross-cultural dialogues. These ideas place us at the cutting edge, internationally, of cultural provision, community building, and social prescription. Together with our partners across the North-East, we can be part of a cultural renaissance.

“Our wide-ranging research on customs like pre-nuptial rituals and the burning of the Clavie, skills like boatbuilding, belief practices, policy matters like Intangible Cultural Heritage, and the cultural expressions and stories of immigrants to the region, paint a rich picture of the North-East’s unmatched traditions.

“Our music, song, craft, and story are gems waiting to be discovered by new generations, both locals and tourists. They’re a deep well of human creativity ripe for exploration by contemporary practitioners.”

The Institute has supported the musical and literary traditions of the North-East with popular events such as the North Atlantic Fiddle Convention, which brings together traditional musicians from across the globe and attracts tens of thousands of visitors to the city, the Cullerlie Traditional Singing Weekend, the David Toulmin Prize for North-East Writing, and through projects like the digitisation of the James Madison Carpenter Collection of traditional song and drama completed in partnership with the Library of Congress.

Elphinstone-led initiatives have been vital, too, in gaining increased recognition for Doric, giving rise to the North-East Scots Language Board, now constituted as the Doric Board.

A project running in Banff is exploring whether learning in the native tongue can improve attainment across the curriculum while classes in using Doric with confidence had to be doubled after attracting participants from around the world.

“For a long time, the language has been thought of as only suitable for home and playground, but before that, it was an influential tongue, in court, literature, and international affairs,” Dr McKean adds.

“It’s not about bringing back old words we no longer need, but rather having confidence to use our own tongue – and the ways of thinking that go with it – in places we’ve been conditioned not to.

“You might ask why this matters, but everyone’s language and cultural roots are central in building pride in who you are and where you’re from.”

A wide cultural mix will be reflected in the anniversary event which will welcome the renowned North-East fiddler Paul Anderson who has composed a new tune to celebrate the Institute, Sheena Blackhall, North-East Makar who has written a poem in honour of the Institute, and Robbie Shepherd, former presenter of Take the Floor on BBC Radio Scotland and Honorary President of the Friends of the Elphinstone Institute.

Anyone interested in attending the event, which begins at 6:30pm at the Elphinstone Institute should contact the Institute at 01224 272996 or elphinstone@abdn.ac.uk.