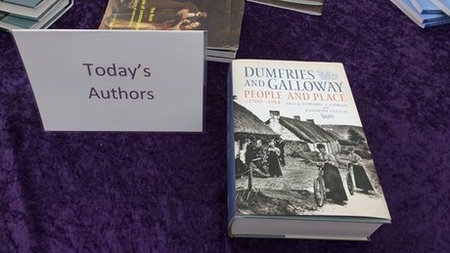 Launched at 21st Wigtown Book Festival. Contributors were specialists with an in-depth knowledge of the region through life/work including Dr Lorna Philip, Geosciences Senior Lecturer from Aberdeen University.

The 21st Wigtown Book Festival, took place from 27 September to 6 October 2019.  As one of the UKs premier literary events, it is ten day literary celebration not to be missed.

Dr Lorna Philip’s chapter documents a period in rural Scotland’s history marked by profound agricultural, industrial and demographic change.   Her contribution on population growth and the development of towns and villages in Galloway, 1755 – 1841, draws upon sources including Webster’s Census of 1755 and entries in the Old and New Statistical Account of Scotland alongside a novel analysis of the entries for Galloway parishes recorded in 1841 Census enumeration books (record of c75,000 individuals!).

Dumfries and Galloway People and Place, c.1700-1914 Published by Birlinn, edited by Edward J Cowan (Emeritus Professor, formerly Professor of Scottish History at the University of Glasgow and Director of the University's Dumfries Campus, as well as a regular speaker, broadcaster and writer) and Kenneth Veitch (Research fellow at the European Ethnological Research Centre, School of Literatures, Language and Culture, University of Edinburgh).

Save the date for next year and come along from 25 September to 4 October 2020 to the 2020 Wigtown Book Festival.