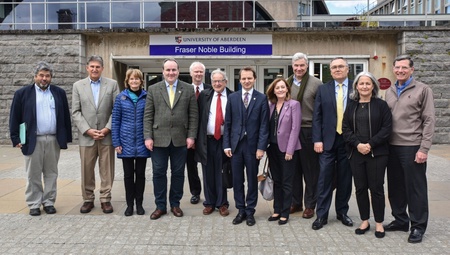 Carbon capture and conversion technology pioneered by a spin-out company formed at the University of Aberdeen was the focus of a visit by an influential group of U.S. Senators and Scotland's Energy Minister yesterday.

The delegation of U.S. Senators was led by Sen. Lisa Murkowski, chairman of the Senate Energy and Natural Resources Committee. Together with Paul Wheelhouse MSP, they formed the core of the group that visited the University’s School of Engineering, where they met with senior figures from the company.

A tour of laboratory facilities was followed by a presentation on the company’s work to develop technology capable of capturing CO2 from large industrial emission sources, and turn it into valuable carbon-negative industry feedstocks and building materials for use in construction projects.

Emeritus Professor Fred Glasser, Chair in Chemistry, and Dr Mohammed Imbabi from the School of Engineering conceived and developed the technology over several years.  Together with Professor Zoe Morrison, formerly of the University of Aberdeen Business School, and others, they form the team competing in the Carbon XPRIZE finals.

Professor Glasser said: “We were delighted to meet the U.S. Senate delegation and Mr Wheelhouse to talk about our development of this technology, which has the potential to be a game-changer in carbon capture and utilisation, as our progression to the XPRIZE finals testifies.

“Our initial aim in developing the technology is to deploy it for use in large-scale industrial settings, de-carbonising at source from power stations, factories, and other major CO2 sources.

By de-carbonising at source and converting CO2 into sustainable products and materials we can have a major impact in reducing global CO2 levels" Professor Fred Glasser, CCM (UK) Ltd

“In the future, we envisage that it can also be scaled down and miniaturised for use across a wide range of emission sources, from different transport platforms to people’s homes.

“By de-carbonising at source and converting CO2 into sustainable products and materials we can have a major impact in reducing global CO2 levels.”

Following the visit, Scottish Energy Minister Paul Wheelhouse said: "As a graduate of the University, I very much enjoyed my visit to the University of Aberdeen and the discussion with the US Senators and their delegation.

"The hands-on tour of the Carbon Capture Machine was fascinating and the project's success to date in becoming a 'Carbon X Prize' finalist is testament to the hard work and ingenuity of the team at Aberdeen.

"I wish them every success in its next challenge to build the 'carbon capture machine' to a commercial scale in Wyoming and was particularly impressed by the ability of the process involved to generate useful building materials that could lock in carbon dioxide emissions and, in doing so, to create value from what has been seen as a damaging waste product, and thereby helping to make a potentially significant contribution to tackling the climate emergency."

University Senior Vice-Principal Karl Leydecker added: “It was an honour to welcome members of the U.S. Senate Committee and Scotland’s Energy Minister to Aberdeen today.

“The University is renowned for its strength in interdisciplinary research that aims to address global challenges, and the creation of CCM (UK) Ltd underlines our commitment to supporting and commercialising emerging technologies that have been developed here.”