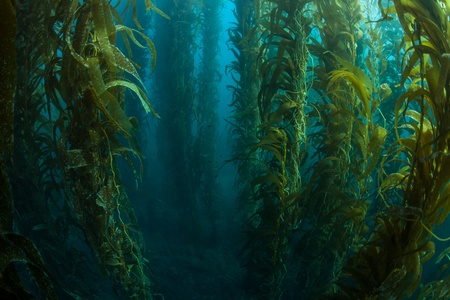 A row over commercial kelp dredging on Scotland's west coast has inspired a new research project which will see academics in Aberdeen and Japan develop new approaches to the political ecology of coastal societies.

The ESRC (Economic and Social Research Council) funded research stems from a review of the regulations around the harvesting of kelp in Scottish waters which was announced by the Scottish Government at the end of last year.

Traditionally harvested on the shoreline, by hand, seaweed has been used in the production of things like soap and glass, and is also gathered by crofters for use as fertiliser.

But commercial firms are now turning their eye on the dense forests of kelp that grow off the coast, where much greater quantities can be harvested directly.

A row erupted over an application by a firm to collect 30,000 tonnes of seaweed off the Scottish coast.

Critics claimed the move could damage the marine environment, deplete fish stocks, increase coastal erosion and drive climate change while the company argued that the industry is sustainable and could be worth up to £300m a year.

It led to a review of regulations and now academics from the University of Aberdeen hope to contribute to the debate having secured funding which will enable them to work alongside counterparts in Japan, where seaweed had been harvested for thousands of years.

The project will be led by Professor David Anderson, he said: “We aim to build a network to examine the social and political context surrounding the harvesting of seaweed, with special attention to traditional rights and methods of building a ‘blue economy’ which encourages better stewardship of our ocean resources.

“The controversy surrounding the commercialisation of seaweed harvesting off the west coast brought the potential conflict between communities and industry in this area to the fore.

“In Japan seaweed has been an important part of the economy for centuries and they have significant experience in working with local communities. We want to investigate that experiences and see what lessons can be learned in Scotland which can inform how we move forward.”

Researchers in the social sciences, marine science, ecology and geology from both the University Aberdeen and Tohoku University in Japan will together converse with stakeholders, managers, and visit local communities to explore the issue.

In addition, the project ‘The Political Ecology of Coastal Societies’ will also investigate the legacies of community-based flood management and mitigation systems with an eye to identifying best practice.

Professor Anderson said both universities were uniquely placed to investigate the issues in terms of both geography and expertise.

“As coastal universities, the issues are of central concern to the areas in which we are based. This funding will allow us to bring together anthropologists, biologists, geologists and coastal scientists to look at innovate solutions which have communities at their heart.”