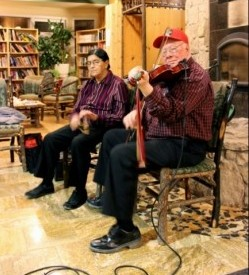 A rare opportunity to see and hear the only exponents of traditional James Bay fiddle repertoire by Cree musicians and key tradition bearers (James and Daisy Cheechoo, both in their eighties).

Brought over from Moose Factory, Canada by Dr Frances Wilkins, visiting Lecturer in Ethnomusicology and Scottish Music from the Department of Music, University of Aberdeen (funded in part by The North).

They will also perform at the Orkney Folk Festival (as part of their John Rae 200 year memorial celebrations) at the end of May.

In their eighties now, they are the only exponents of the traditional James Bay fiddle repertoire which was believed to have been originally brought to the region by Orcadian fur traders with the Hudson's Bay Company.

Their visit is linked to a previous RSE-funded research into James Bay fiddle music and photographic exhibition.

Both musicians were featured in Dr Frances Wilkins’ photographic and videography exhibition in the MacRobert Building last year. http://jamesbayfiddle.blogspot.co.uk