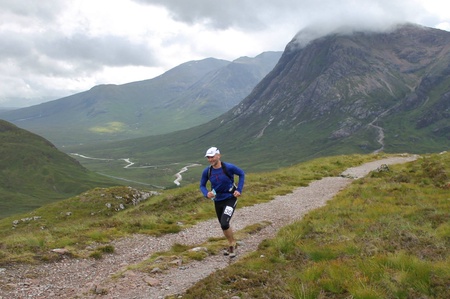 An Aberdeen graduate will return to the University as the starting point for an ultramarathon which will see him complete a gruelling run of over 98 miles to St Andrews in a day.

Mark Calder, who has completed both a Masters of Research and a PhD in Anthropology at the University will embark on his challenge on Friday (March 8) departing from King’s College Chapel where he once sang as part of the Chamber Choir.

The ultramarathon is the second of 14 he intends to take on this year as part of an extreme endurance challenge to raise money to support children in the Middle East.

Last month he completed the first leg of his running pilgrimage taking on St Mungo’s route from Dunfermline Abbey to Glasgow Cathedral, a distance of 45 miles.

Friday’s ultramarathon will step up the distance to 95miles but is far from the most extreme of his planned ‘Running Home’ challenge which includes routes around Scotland and the north of England and will see him tackle distances in excess of 300 miles.

Mark, 36, is raising money for Embrace the Middle East, a charity which supports projects helping refugees returning to cities occupied by the Islamic State, particularly in Iraq.

He said his passion for the region grew when he researched peace-building in Syria and the predicament of young people across the southern and eastern Mediterranean regions after completing his doctorate.

Mark is starting and finishing all of his runs at places of historical significance and each of the routes takes in the footsteps of Celtic saints.

He said that setting off from King’s College Chapel holds particularly personal connection thanks to his time as a student at the University.

“King’s College Chapel is not only a beautiful and historic place but somewhere which also holds special memories,” he said.

“I remember services and morning prayer there fondly and even took refuge there a few times on my own when the thesis-writing process was at its most intense.

“I am hoping to reach St Andrews in just over 24 hours and will take me through areas of the north-east connected to the cult of St Duthac, on whose feast day I’ll be running.

“While his heartland was up in Tain, where I’ll be running later in the year, I wanted to do a route that connects St Andrews and Aberdeen via places such as St Vigeans, Arbroath Abbey, Brechin Cathedral, and Stonehaven, where there are a few hints at Duthac in place names like Arduthie.

“Just before I arrive in St Andrews, I hope to visit the extraordinary Norman church of St Athernase in Leuchars.”

Mark will be blessed by the University Chaplain Marylee Anderson as he departs at 6.45am and will be drawing on the difficulties he’s seen first-hand in the Middle East for motivation to complete the gruelling challenge.

“I don't take it for granted that I'll be able to do it, but it's hugely motivating to think that my journeys here might help to create a happy ending to this desperately sad story of displacement and loss in Iraq,” he added.

“I have trained as wisely as possible, seek to avoid injury and illness and, importantly, accept people's prayers, advice, help and support. I have run a few ultras and several marathons, but the lack of recovery time this year is going to be the real challenge. I guess we’ll see!”

To follow Mark’s story or to support his fundraising effort visit www.runninghome2019.co.uk