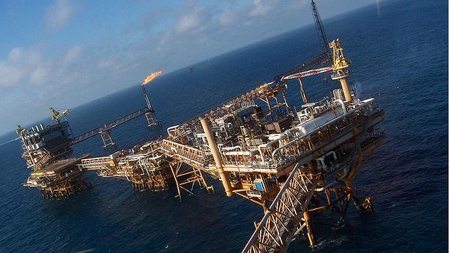 Geologists at the University of Aberdeen have discovered a huge swathe of the North Sea left unexplored for oil and gas because of so-called 'phantom' volcanoes they have proven don't exist.

The 7000 sq km area, known as the Rattray Volcanic Province, was previously thought to contain the remains of three volcanoes that erupted 165 million years ago, when the North Sea tried to create an ocean between itself and Europe - a ‘rifting’ episode geologists have described as a failed ‘Jurassic Brexit’ attempt.

For decades it was assumed that the area contained the empty remains of old magma chambers, ruling out the possibility of oil and gas discoveries.

However, a study led by Dr Nick Schofield and PhD student Ailsa Quirie from the University’s School of Geosciences, with colleagues from Heriot-Watt and the University of Adelaide, has overturned this view.

Dr Schofield explained: “Building on methods we have used to look at prospectivity in volcanics elsewhere in the UKCS, we combined 3D seismic data donated to us by Petroleum Geo-Services (PGS) with well data to take a fresh look at the Rattray Volcanic Province.

“What we found has completely overturned decades of accepted knowledge.  Previously, it was believed the area contained old magma chambers - the plumbing systems of three Jurassic-era volcanoes – that effectively ruled out the potential for oil and gas discoveries.

“However, our study has shown these volcanoes never existed at all, and that the fireworks preceding the North Sea’s attempt to create an ocean with Europe came via a series of lava fissures.

Essentially this gives us back a huge amount of gross rock volume that we never knew existed, in one of the world's most prolific regions for oil and gas production" Dr Nick Schofield

“Essentially this gives us back a huge amount of gross rock volume that we never knew existed, in one of the world’s most prolific regions for oil and gas production.”

The study’s findings raise the prospect of future discoveries in the area, which has been left untouched over 50 years of exploration activity in the North Sea.

“There is a huge area under there that hasn’t been looked at in detail for a long time, because of the previously incorrect geological model,” Dr Schofield said.

“That’s not to say that exploration wouldn’t be challenging, but technology is constantly improving and there are still big discoveries being made in the North Sea, as we’ve recently seen in the Central Graben and Viking Graben areas.

“As the old saying goes, often the best places to look for oil are in places near to where you’ve already found it, and the North Sea is a prime example of that.”