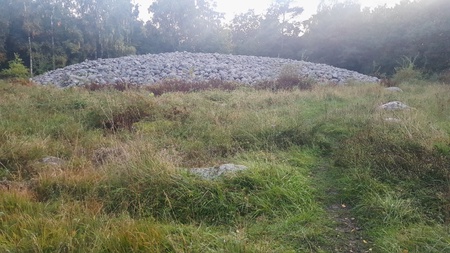 The County Museum of Kalmar held a workshop to which was invited Scandinavian Studies PhD student Caroline Wilhelmsson, whose research involves unknown aspects and interpretations of late antique and early medieval Sweden.

As part of Caroline Wilhelmsson’s PhD on Swedish Identity in Early Sources, Caroline was invited by Professor Kitzler Åhfeldt from the Swedish National Heritage Board to attend a workshop at the County Museum of Kalmar from 9 to 13 October 2018.  She extended the trip to include some fieldwork. The North theme funded in part, Caroline’s research trip.

Caroline pursued further research and investigations by visiting the nearby island of Öland which is accessible via a bridge from Kalmar to look at runestones and archaeological sites scattered over the 180 km-long island. Caroline also attended the Harvest Festival, a week-long pagan tradition celebrating the island’s heritage and culture which enabled her to find further research material, and to conduct interviews with experienced experts.

She then spent a few days in Stockholm where she sought to learn more about medieval Sweden as a unified entity rather than from a strictly regional perspective. She consulted archives and visited various cultural institutions as well as museums to gain a better understanding of how central power shaped the country and its perception from the outside.

Caroline’s research is primarily concerned with a fascinating but unknown aspect of late antique and early medieval Sweden, namely the concept of Sweden itself, and notably aims to understand how outsiders perceived their neighbours. She is also working on interpreting artefacts which are typical to the Baltic region.