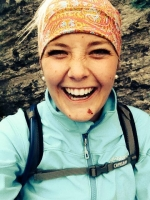 The North theme partially funded Rachel Oien's attendance at a course to gain a deeper understanding of paleo, present, and future climates along with 60 international students and postdocs.

One of the many aims of this course was to bring together PhDs and postdocs from around the world to look at the integration of proxy records and modelling from a phytoplankton scale to global climate models. With discussions on the current state of literature toward the ‘big’ questions in order to move the field forward.

Rachel found it most useful to meet with the other 60 students from universities around the world, who are working with different aspects of palaeoclimate models and records. Rachel was truly inspired by their research projects to discover where this niche field is headed in the next few years. The stimulating conversations about the difficulties and missing questions, along with collaborations and feedback from different perspectives was an invaluable resource.  Obviously, working with the last 64 million years of climate change, they moved into their subfields, but about half of the course was working with the Pliocene to present. More importantly, this propelled considerations as to how they viewed atmosphere-ocean-ice interactions.

Rachel found one of the most interesting lectures was by Bert Vermeersen from TU Delft about the response of sea level to ice sheet growth and decay and how sea level actually rises during the onset of Antarctica during the early Oligocene. Beyond glacial isostasy, incorporating the geodetic earth response has a very important role in how sea level is interpreted, and an even more important role when attempting to model future predictions of sea level rise.

Rachel's highlight of the course was the field day. The rocks included the K/T boundary which defines the extinction of the dinosaurs and the PETM and ETM2, which represent a drastic change in climate change. Within the stratigraphic section, they also studied Milankovitch cycles in the rock record and discussed the correlating carbon record of the Eocene. Lunch was at nearby local café where the guest book housed names of famous climates scientist for the past 40 years visiting these very same outcrops.

As the course concluded, it was clear that understanding these drastic changes in world temperature and carbon dioxide is the only available record to predict the future. The course ended with evening discussions about science communication and how to present research to the public, politicians, and other scientists. Rachel thought that the course was phenomenal, and found great pleasure in learning from professors at top universities from all over the world. Rachel also found that it gave her a great deal to contemplate and consider as she moves forward in her research and appreciated the support for this invaluable experience to advance her knowledge of climate and meet other incredible colleagues that will provide many future collaborations.