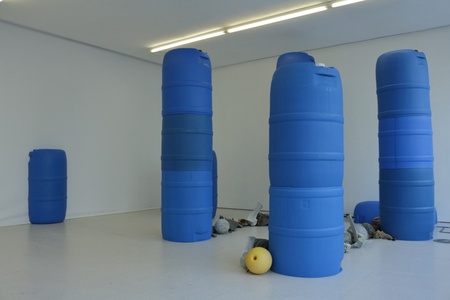 Sonic Arts PhD student funded by The North theme, created an immersive sound installation. Inspired by visits to uninhabited Scottish islands and the plastic pollution he found there - caused by human impact.

Inspired by a trip to the Hebridean isle of Scarp. On the southwest side of the island is a beautiful rocky beach called Mol Mor, a rugged landscape that plays host to an unbelievable accumulation of plastic which has washed up from the sea. An extended beach clean-up project was initiated and objects were collected to use as acoustic bodies in the exhibition, drawing attention to the magnitude of the plastic pollution problem through a four-channel sound composition based on recordings made while on Scarp. This work is the second of the series Mountains Underwater.

The Mountains Underwater series began in the summer of 2017, after Tyler learned about the many uninhabited Scottish islands that were once home to thriving communities built on crofting and fishing. He became interested in what these remote places can tell us about our contemporary lives, in this time period that sees people moving more and more into urban areas, becoming out of touch with the natural world around them. During research trips to these wild islands, including Mingulay, Scarp, the Monachs, the Shiants, Eilean nan Roan and Stroma, Tyler and his wife Mara used audio field recording to build a bank of sounds, along with taking photos or video, and collecting symbolic objects/materials found in the landscape.

This work aims to show the level of impact humans have, even on a presently uninhabited island, and hopefully encourage more environmental action to tackle the huge problem of plastic pollution in our oceans. It is part of a series of immersive installations made in collaboration with Mara Marxt Lewis, featuring multi-channel soundscapes composed by Tyler Lewis. Audio recordings and physical objects from the isle of Scarp (just off the west coast of North Harris in the Outer Hebrides) were collected and presented in the exhibition at the Tent Gallery, University of Edinburgh where ‘Mountains Underwater: Scarp’ was shown from 13 to 26 September 2018.