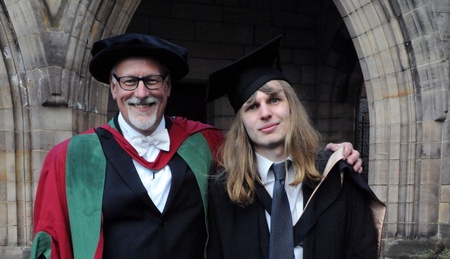 Father and son composers from the University of Aberdeen will both hear their new work performed for the first time on Saturday.

The work of Joe Stollery, who is currently studying towards a doctorate in composition, will be brought to life in Aberdeen’s St Andrew’s Cathedral while a new piece by his father Pete Stollery, Professor of Composition and Electroacoustic Music, will be heard in Braemar.

The 24 year old said the north-east environment and its history, nature, myths and legends, especially with regard to mythical creatures, and the supernatural, underpins much of his music.

“I have long been interested in the intricate symbols carved into the standing stones for which Rhynie has become famous,” he added.

“These range from animals - real and fantastical - to inanimate objects and abstract symbols, often in combinations on each stone. Because almost nothing is known for certain about the meanings of the symbols, I have had the freedom to express my own interpretations of the symbols through musical means.”

The concert will take place as part of Cathedral at Noon at St Andrew’s Cathedral and is free to attend.

The inspiration for his father’s work, You’re a Fisherman’s Bassoon, which will be performed at 7.30pm in St Margaret’s Church Centre, Braemar, stems from a more unusual source.

Professor Stollery explains: “A few years ago a friend came up to my wife and she was convinced he has exclaimed, ‘You're a fisherman's bassoon’. In fact what he has actually said was ‘Eurovision must be soon’ but this phrase stuck in my head and set me thinking about half-hearing and not quite understanding.

“It provided me with the opportunity to create a piece with this at its heart and to keep it true to the conversation which set in motion this train of musical thought, the piece weaves textures out of short phrases from 34 Eurovision Song Contest winners, including songs by Brotherhood of Man, Lulu and Conchita Wurst.

“It also has a little bit to do with Brexit but is not meant to be taken terribly seriously and I hope the audience will enjoy trying to pick out the Eurovision inspired phrases.”

Although the piece was composed to be fun, it will be performed by the FagottOctet on seven bassoons and one contrabassoon, and Professor Stollery added that it is important to create work for this often overlooked but important instrument.

“The music itself is fun but there was a more serious purpose behind its composition. The bassoon is said to be dying out as it is recognised by just ‘one percent of people in the street and yet it is an important member of the woodwind section and a wonderful instrument in its own right.

“By creating new music for the bassoon and opening it up to new audiences I hope I can play a part in encouraging young musicians to take it up.”

Joe’s concert is free to attend and booking is not required but tickets for Pete’s piece can be bought at the door.