Staying Together? Experts gather in Aberdeen to discuss crisis and survival in political unions
13 September 2018 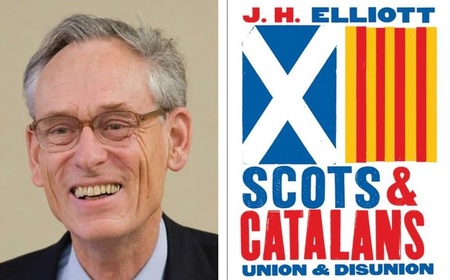 Fierce debate surrounds independence for both Scotland and Catalonia and experts will gather at the University of Aberdeen next week to discuss crisis and survival in political unions in historical perspective.

On Tuesday (September 18) a free public lecture with Sir John Elliott, Britain’s leading historian of Spain, will explore the deep roots of one of Europe’s most pressing contemporary issues and on Wednesday (September 19) there will be a roundtable event and book launch which will consider the similarities and differences between the Scottish and Catalonian experience.

The public events form part of an international symposium organised by the University of Aberdeen entitled Staying Together? Crisis and Survival in Political Unions since 1469 which will bring together historians, political scientists, and journalists to discuss the resilience and persistence of political unions across the last five centuries – lending a historical context to the hotly contested issues.

Professor Robert Frost, from the School of History, said: “The problems of political unions have dominated the news agenda in recent years. The UK government is currently trying to extract itself from one union while trying to preserve another union, while the question of independence dominates politics in both Scotland and Catalonia in the wake of the recent referenda. Many people have deplored the content and tone of the debate on these vital constitutional issues and we hope that these events will help to offer a more reasoned and scholarly perspective to those interested in the wider context of the debate.”

The University offers a range of expertise on the subject through the work of three of its research centres - the Research Institute of Irish & Scottish Studies; the Centre for Early Modern Studies, and the Aberdeen/Edinburgh Centre on Constitutional Change.

Many people have deplored the content and tone of the debate on these vital constitutional issues and we hope that these events will help to offer a more reasoned and scholarly perspective to those interested in the wider context of the debate." Professor Robert Frost

Oxford’s Sir John Elliott, recognised as one of the world’s foremost authorities on the history of Spain, will open the event with a keynote public lecture on Scotland and Catalonia; the symposium closes with a public roundtable to launch his latest book, Scots & Catalans, which will be discussed by the prominent journalists and commentators, Iain Macwhirter (The Herald), Alex Massie (The Times), and Peter Geoghegan (openDemocracy).

Professor Frost added: “Sir John Elliott, the doyen among Britain’s historians of Spain, will deliver a public lecture comparing and contrasting the historical background to the Scottish and Catalan experiences of union.

“This is sure to be a fascinating discussion and we look forward to welcoming Sir John and our other guests to the University for the Scottish launch of the book.”

The Tuesday lecture will take place from 6pm to 7.30pm in the Sir Duncan Rice Library and Wednesday’s discussion event and book launch will commence at 6pm in the Linklater Rooms at the King’s College campus. Both are free to attend but places must be reserved through Eventbrite.