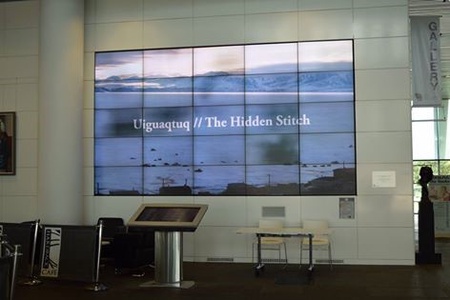 The MAMC internet channel https://vimeo.com/mamc/ launched last summer with over 70 'masterclasses' available to view and download. All credits to the fabulously talented seamstresses who generously shared their time and skills to promote the sustainability of this art form internationally.

This sealskin sewing video installation at the University of Aberdeen Sir Duncan Rice Library foyer, ran from 23-30 August on two screens: one playing an 8 minute video (Uiguaqtuq: The Hidden Stitch) and a second playing a 52 minute video (Irnivik: Airing Frame) on a loop, during opening hours, 8:00am to 10:00pm. The exhibition was co-curated by Melisa Costinea, Sheila Katsak and Nancy Wachowich to celebrate sealskin sewing arts as part of the 2017 Rectors’ Forum of the University of the Arctic.

Mittimatalik Arnati Miqsuqtuit Collective (MAMC ) was established in February 2015, as a small-scale digital archiving project in the predominantly Inuit settlement of Mittimatalik (Pond Inlet, population:1600) on northernmost Baffin Island (http://tinyurl.com/mapofpondinlet), Canada. (i)  The core team was comprised of:

An intensive phase of visual documentation, recording footage and photographs for an online databank of sealskin sewing ‘master classes’, was followed by a longer post-production editing phase, when footage was clipped, trimmed, aligned and stitched together by the video editor working collaboratively with collective members.

A second follow-up phase of recording took place in Spring 2016, this time with smaller crews of younger apprentice seamstresses taking on most of the recording responsibilities, yielding 40 hours of footage.

The MAMC internet channel https://vimeo.com/mamc/ launched that summer can be viewed and downloaded.  It showcased over 70 ‘masterclasses’ (between 3-15 minutes in duration), short compilation films, and longer ‘real time’ pieces.  For community members without easy access to the internet, portable external hard drives pen drives circulating in the settlement enable materials to be shared freely among family and friends locally. Photobooks have been printed for elder seamstresses without home computers.

Updates on new productions appear on a private Facebook group (http://tinyurl.com/MAMCFBgroup), on a public Facebook page (http://tinyurl.com/MAMCFBpage) and through a dedicated Twitter feed.(ii) Currently, 15 women seamstresses and videographers in Mittimatalik are active members of the Collective, but membership changes.(iii)  By generating this digital archive, profiled on different media platforms, MAMC’s stated goal is to provide an open and accessible learning resource, championing sealskin sewing as an artistic tradition, providing a cultural resource for skills, and promoting the resilience and sustainability of Inuit seal hunting.

(i) Project is part of the Mobilizing Inuit Cultural Heritage (MICH) program, a multi-media multi-platform project funded by Social Sciences and Humanities Research Council of Canada (SSHRC) partnership initiative and based at York University, Canada. The stated goals of MICH’s range of projects are to explore the contribution of Inuit visual culture, art and performance to overarching questions of language preservation, social well-being and cultural identity. MICH also aspires to increase access to advance information and digital communications technologies, connecting Inuit voices to objects of cultural heritage, and creating Inuit cultural capacity.

(ii) A third and final recording phase took place in summer 2017, the themes and focus of which will be determined by participating seamstresses.  The means by which MAMC will continue to disseminate this documentation digitally in the near and distant future are still to be established, and contingent upon infrastructural developments in digital broadband connectivity across the Canadian north.

(iii) The collective began as a series of discussions between me and my long-time friends and co-coordinators in Mittimatalik, Sheila Katsak and Leah Kippomee. As we were planning the first recording session for February 2015, anthropologist Gro Ween, from Oslo offered to come along and bring her department’s HD camera. Sheila Katsak’s and Leah Kippomee’s daughters, Skylar and Amy respectively, joined our group as youth production assistants. We worked with three seamstresses that first trip: Ruth Sangoya, Paomee Komangapik, and Koopa Kippomee. Romanian born and UK-based editor Melisa Costinea was hired on to work with the footage in Aberdeen. And in June 2016 our group expanded to include Mittimatalik-based videographers, Georgina Pewatoaluk