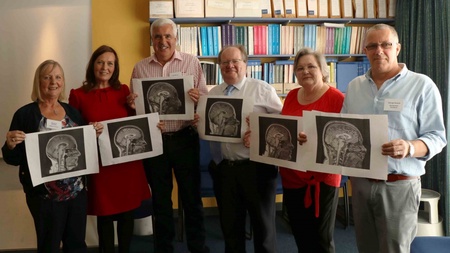 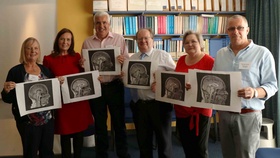 Some of the Children of the 1950s volunteers posing with their own brain scans, taken as part of the STRADL study into depression

More than 500 Aberdeen volunteers have been recruited to a major £4.7million study to understand depression more clearly than ever before.

Researchers held a celebration and information event today (May 30) to thank participants and call for more to come forward.

Clinical depression is the leading cause of non-fatal disability in the world and contributes to massive socioeconomic impact in terms of time off work and reduced productivity.

Experts say that rather than being one disease, clinical depression is a collection of different disorders with one common symptom – that of low mood.

However, there has been a lack of high quality research to understand different brain disorders that may cause the condition.

The STRADL (Stratifying Resilience and Depression Longitudinally) study, led by Professor Andrew McIntosh at the University of Edinburgh and run by researchers at the universities of Aberdeen, Dundee and Edinburgh, is funded by the Wellcome Trust. It uses brain scans, blood tests and cognitive tests to study people with and without a history of depression to identify and arrange different subgroups in a bid to identify common risk factors and new treatments.

The STRADL study is built on Generation Scotland – a massive resource of biological samples available for medical research. Researchers at the University of Aberdeen have targeted a subset of the Aberdeen Children of the 1950s Cohort and their relatives. In primary school the Aberdeen Children of the 1950s – a group made up of all the children born in the city between 1950 and 1956 - sat tests of reading and mental ability. As such, researchers are able to build up a lifelong profile of participants. At the University of Dundee recruitment has targeted the Walker Cohort, people with prior birth details, and their relatives.

By gathering information such as brain scans, cognitive tests and other clinical measurements, we hope to be able to better categorise people and as such identify more specific areas to develop new treatments." Professor Alison Murray

Each participant in the STRADL study is scanned in an MRI machine because the resulting images show differences in brain structure and function that may be associated with depression. Importantly, this means people who have been exposed to the same risk factors but not developed depression, can be compared to those who have become depressed.

Participants are also given a test of their cognitive abilities - thinking and memory tests as well as other clinical and emotional tests.

Professor Alison Murray who is leading the study in Aberdeen said: “Depression remains very complicated to diagnose. There is no simple set of criteria that allow us to identify those who are most at risk and how best to treat them.

“The STRADL study aims to reclassify depression based on biology. By gathering information such as brain scans, cognitive tests and other clinical measurements, we hope to be able to better categorise people and as such identify more specific areas to develop new treatments.

“The beauty of working with the Aberdeen Children of the 1950s Cohort, is that we can compare the results of people who have depression and those who don’t, not just today, but also from when they were in primary school. This helps us better understand why even when people who are exposed to the same risk factors in life, some are resilient and don’t get depression, whilst others do. There may be life course events, or genetic differences that predispose some to depression. There are also things we can detect in blood samples or brain scans about how they process information differently.

“We are delighted to have recruited more than 500 people already in Aberdeen and along with our partners at the University of Dundee, we are more than halfway towards our overall goal. We’re so grateful for all those from Generation Scotland who have already taken part and we would call for any other members who haven’t yet, to contact us for a chance to help us come up with new ways to treat this debilitating condition.”

Any members of the Children of the 1950s Cohort who would like to get involved in the study should contact 01224 438443 or children1950s@abdn.ac.uk. Or visit http://www.abdn.ac.uk/birth-cohorts/ or http://facebook.com/aberdeenbirthcohorts