Aberdeen law trio scoop awards at The Hague
25 May 2017 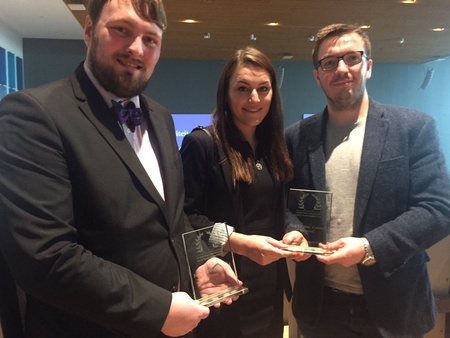 A trio of law students from the University of Aberdeen enjoyed success at a recent International competition at The Hague.

The Competition involved 64 teams from 46 countries, with the Aberdeen team securing a place in the quarter finals. They were also presented with the awards for ‘best victims written memorial’ and the ‘best overall victims team’ -  which is the award given to the team who had the highest combined score for the victims written and oral component of the moot.

The team was made up of Callum Thomson, Christine Brownlie and Jonathan Brown who have just completed the Diploma in Professional Legal Practice at the Law School. They were accompanied by their coach, Dr Phil Glover from the Law School.

Dr Susan Stokeld from the School of Law said: “This is a fantastic achievement and we are all immensely proud of Callum, Christine and Jonathan.

To compete in such a large scale moot can be a daunting prospect but they handled the pressure tremendously and were brilliant ambassadors for the University." Dr Susan Stokeld

“To compete in such a large scale moot can be a daunting prospect but they handled the pressure tremendously and were brilliant ambassadors for the University.”

Callum added: “This has been a brilliant experience for the team and I am so pleased I was able to be a part of it. I have taken so much from it.

“I have developed my knowledge and understanding of international criminal law, and more generally public international law and feel I significantly improved my written and oral advocacy skills. Particularly I developed my capacity to respond to challenges, as opposing teams and the judges on the bench frequently challenged the legal arguments I advanced. I had to quickly respond to such challenges in a respectful and coherent manner, which strengthened my case.”