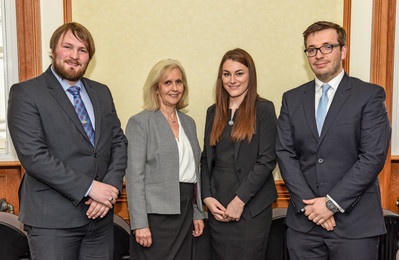 Three students from the University of Aberdeen's Law School have been gearing up to take part in an International competition at The Hague by getting some practise in at Aberdeen Sheriff Court first.

The team from the University, made up of Callum Thomson, Christine Brownlie and Jonathan Brown who have just  completed the Diploma in Professional Legal Practice, will moot a fictional case from the standpoint of the defence, prosecution and victim.  The trio will compete against other universities in preliminary rounds and then potentially knock out rounds in a bid to reach the final.

The team have been working hard, preparing and practising their case, and this week were able to do a practise run before Sheriff Napier at Aberdeen Sheriff Court.

Callum commented: “I have a strong interest in international criminal law, and Jonny and Christine were keen to join the team to learn a new area of law and to further develop their advocacy skills.

The support the students have received from the staff at the Law School has been exceptional, and they were also very fortunate to get to have a practice run at Aberdeen Sheriff Court before Sheriff Napier." Dr Susan Stokeld

“We have received fantastic support from the School of Law - in particular from our coach Phil Glover, and also Dr Susan Stokeld, Director of the DPLP and Anne-michelle Slater, Head of School.  In addition numerous members of the school have given up their time to act as guest judges during our practices.”

Susan Stokeld from the School of Law added: “It is very exciting that Callum, Jonny and Christine are competing in this competition and I am sure it will be a fantastic experience for them.

“The support the students have received from the staff at the Law School has been exceptional, and they were also very fortunate to get to have a practice run at Aberdeen Sheriff Court before Sheriff Napier.

“I wish them all the best for the competition and am extremely proud of how committed they have been in their preparations.”