Surf star Megan is number one in Scotland
20 April 2017 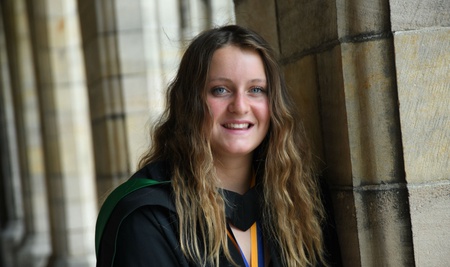 A University student has become Scotland's top female surfer after her victory in a national competition.

Her success follows on from her winning performance in the Women’s Open final of the Nordic Surf Games in Norway, which the Scottish Surfing Federation described as ‘the highest accomplishment of any Scottish surfer ever at an international event’.

As well as becoming Scotland’s top female surfer, Megan’s win in Thurso means that she qualifies for the Scottish Surfing team for 2017/2018, with the chance to compete in next year’s World Surfing Championships.

Reflecting on her performance at the weekend, Megan said: “The conditions were extremely difficult, with very strong onshore wind and messy waves, but I managed to surf my way to the final where I was up against three other ladies.

I never expected to win two major titles in as many months, let alone become Scotland's top female surfer, so I can safely say it's been an eventful year so far!" Megan Mackay

“Thankfully I managed to select the better waves that came through, which gave me the chance to show some critical skills and complete some challenging manoeuvres.

“I’m really happy to have won, especially as it means I have qualified for the Scottish Surfing team which gives me the chance to take part in the European Championships later this year, and the World Surfing Championships in Japan in 2018.

“I never expected to win two major titles in as many months, let alone become Scotland’s top female surfer, so I can safely say it’s been an eventful year so far!

“I’m now really looking forward to building on what I have achieved and representing my country on the international stage.”