In defence of the Vikings: they wouldn't have suffered Donald Trump
04 April 2017 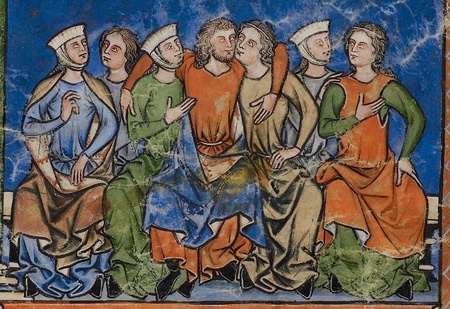 An Aberdeen based scholar of Viking-Age Scandinavia has had his article published in The Conversation. Keith Ruiter refutes suggestions that Donald Trump may have inherited assertive traits from his alleged Viking ancestors.

Suggestions have been made that Donald Trump “may get his assertive rather than passive manner from his alleged Viking ancestors”. Or so says Russian genealogist Aleksey Nilogov, who has been finding some traction for his beliefs on nationalistic eastern European news sites such as the Estonian World Review.

Leaving aside the issue of genetic predispositions, as a scholar of Viking-Age Scandinavia, Keith Ruiter takes issue with this claim. The Vikings were a product of their time and – in that context – were a much less objectionable bunch than these suggestions imply. Delving into the Old Norse language helps to better understand some of the ways that medieval Scandinavians might have viewed the overbearing and isolationist rhetoric dominating the international stage of late. In fact, just such an analysis suggests that Trump would probably not have had a great time navigating the political intrigue presented in the Icelandic Sagas.

The key to understanding these concepts in their contemporary context lies in the language of the early Scandinavian sources that survive. Sometimes, a single word can unlock a cluster of semantic and conceptual understandings.

Take, for example, the Old Norse word ójafnaðarmaðr. Broken into its constituent parts, the word could be rendered in English as “un-even-person”. But in the contexts of Eyrbyggja saga, one of the Sagas of Icelanders focusing on a locality in the north-west of the island, it’s clear that the unevenness being described is a disregard for fairness, equality, justice and the rights of others. This has led scholars to render the word as “an overbearing man”. An ójafnaðarmaðr, such as Styrr Þórgrímsson in Eyrbyggja saga, is fundamentally a social bully of the type who uses force and cunning to better their own position at the expense of those around them, save for a small group of loyal supporters drawn to their ruthless approach and success.

This certainly sounds like Trump’s infamous tactics: from his Twitter tirades, to his promises to bully Mexico into paying for a border wall, even to his ludicrously alpha handshake. His myopic focus on building himself up and cutting others down, even his vision of “America first”, certainly bear the hallmarks of the conduct of an ójafnaðarmaðr.

The problem is that the ójafnaðarmaðr was not someone to emulate or even admire in early Icelandic society, but someone to bring to heel. In the harsh, isolated climes of medieval Iceland, mutual aid from community and kinship were relied upon to rise to the challenges of the day. With no respect for reciprocity or the honour and rights of others, the ójafnaðarmaðr was fundamentally destructive to the fabric of their society – and their antisocial tactics, described in the sagas, tended to cut them off from their communities.

This most often ended up leaving them with precious few friends or allies to help when they inevitably got in over their head. This is certainly the case with Styrr, who needed to marry his daughter, who he loved more than anything, off to an old rival to help him get out of trouble with two berserkers (fierce Norse warriors).

Don’t bark at your guests

The condemnation of tactics used by ójafnaðarmaðr characters is also mirrored in the Old Norse poem Hávamál, “Sayings of the High One” (Carolyne Larrington’s translation quoted below). These verses conclusively deride such things as being disrespectful, overly aggressive, and lack of social engagement, even to those you might distrust.

In fact, Hávamál contains rebuttals for several of Trump’s early executive actions. As just one example, consider stanza 135 in the context of Trump’s adamant support of a travel ban on citizens of seven Muslim-majority nations. The poem warns: “Don’t bark at your guests or drive them from your gate, treat the indigent well!” This seems to stand in stark opposition to Trump’s closed-door vision on immigration.

In a medieval Scandinavian context, this bullying bravado and disregard for hospitality and reciprocity was inherently isolating on a social level. And it is in relation to isolationism and responsible engagement with wider society that Hávamál takes a very clear stance. Stanza 50 says it best:

"The fir-tree withers that stands on the farmstead,
Neither bark nor needles protect it;
So it is with the man whom no one loves,
How should he live for long?"

Clearly antisocial tendencies such as isolationism or bullying were recognised as wholly unsuitable in the societies of the medieval Scandinavian milieu. Active social engagement was incredibly important. In no place is this clearer than in the early laws of Scandinavia, where outlawry – legally imposed exclusion from the community – was considered one of the gravest punishments a criminal could endure.

As the world continues to shrink thanks to modern technology, these old points of wisdom are worth revisiting in the global village of today to remind us of the importance of mutual respect, collaboration, conciliation and strong social bonds with all those around us.

One thing is clear. Any “Viking” ancestor that might be responsible for Trump’s personality would likely not have done that well in his own time.