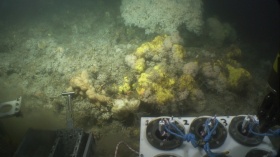 Researchers from Aberdeen University aim to unravel the role of these fascinating organisms in the functioning of pristine deep-sea ecosystems.