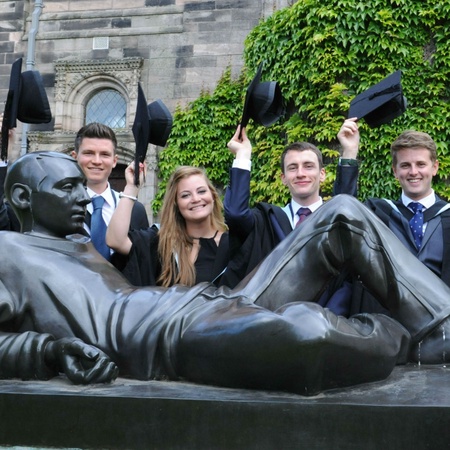 Among those being honoured at the University of Aberdeen's graduations this week are an internationally renowned choral conductor, one of the North-east's most successful businessmen and a Life Peer to the House of Lords.

On Tuesday, a Doctorate of Music (DMus) will be presented to Suzi Digby OBE. Ms Digby is a trailblazer in the revival of singing in UK schools and communities over the last two and a half decades, founding and running many influential National arts/education organisations including: The Voices Foundation, the UK’s leading Primary Music Education charity and Voce Chamber Choir, one of London’s finest young Chamber Choirs.

George Yule, Vice Chairman of Aberdeen Football Club and former Chairman of Aberdeen Sports Village will receive a Masters of the University (MUniv) on Tuesday. Mr Yule is a successful and well-known businessman in the North-east, with a career spanning three decades in the oil and gas sector. A former President of Aberdeen & Grampian Chamber of Commerce, he is also a Burgess of Guild of the City of Aberdeen.

Dame Anne Begg, an alumna of the University of Aberdeen with a distinguished political career, will receive a Doctorate of Honoris Causa (DHC) on Thursday. In parliament, she served on the Work and Pensions Select Committee which she chaired between 2010-2015, during a time of unprecedented welfare and pensions reform. Dame Anne is now a Council member of the SSSC and Patron of a number of charities.

The Rt Honourable Baroness Tessa Jowell will be presented with a Doctorate of Laws (LLD) on Friday. A former University of Aberdeen student, Baroness Jowell served as a Member of Parliament from 1992 to 2015, and during this time she held many senior ministerial and shadow ministerial roles. In the 2012 Birthday Honours, Baroness Jowell was appointed Dame Commander of the Order of the British Empire for political and charitable services, in particular for her contribution to delivering the London 2012 Olympics. She was subsequently elevated as a Life Peer to the House of Lords in 2015. Later this year she will take up a senior teaching fellowship at Harvard.

On Tuesday, the University will also present two Benefactor Awards. These will be awarded to Professor Derek Ogston CBE and Miss Margaret Carlaw.

Professor Ogston is a graduate of the University many times over and a former member of staff. His distinguished medical career included appointments as Regius Professor of Physiology and latterly as Professor of Clinical Medicine.  He acted as Dean of the Faculty of Medicine and Vice-Principal for 10 years, four spent as Senior Vice-Principal.  His support of the Music department and Music students and staff through scholarships, bursaries and prizes includes support for the Ogston Music Prize.

Miss Carlaw is a generous benefactor to Music at the University of Aberdeen and also supported the Sir Duncan Rice Library, along with her cousin Professor Ogston by gifting a book they had co-authored – King’s College, Aberdeen, History, Buildings and Artistic Portrayal to the University, which it could sell.  The proceeds of the book sales were donated to the Sir Duncan Rice Library. Miss Carlaw also supports other areas of the University, including the Far East Student Hardship fund and the Esslemont Scholarship.

Professor Alex Kemp will also be honoured during Graduation week, for half a century of service to the University which began when he started work as a lecturer in political economy in 1966.

Honorary Graduates provide a tremendous example to our Graduands as they embark on the next stage of their career and I am sure they will feel inspired by all that they have achieved." Professor Sir Ian Diamond

Professor Sir Ian Diamond, Principal and Vice-Chancellor of the University, said: “It is always a pleasure to honour the achievements of those who have contributed greatly to not only their chosen fields, but also society as a whole. I am delighted to welcome these extremely talented and successful individuals to the University family, and I am sure they will enjoy this special occasion.

“Honorary Graduates provide a tremendous example to our Graduands as they embark on the next stage of their career and I am sure they will feel inspired by all that they have achieved.

“I am also delighted to mark the incredible achievement of Professor Alex Kemp, who has provided this University with tremendous service over the last 50 years.”