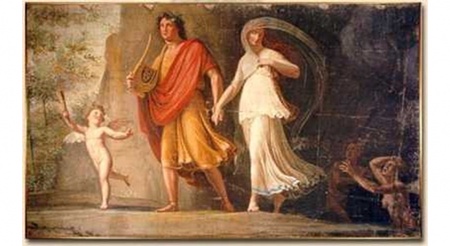 Students from the University of Aberdeen will create a unique new opera this weekend, based on renowned historical material of the early 17th century, never before heard in Aberdeen.

They will perform in Orfeo’s Journey on Saturday and Sunday: a new adaptation of four baroque operas, which is set in the north-east of Scotland.

Their performance will tell the traditional Greek tragedy of Orpheus, a legendary musician who goes to rescue his wife from the Underworld but turns back to look at her too soon and she is lost to him forever, from a new perspective and with an accompaniment of popular musical standards of the early 17th century.

The students have been preparing for the opera since October, but have brought it together following a series of intensive workshops with leading tutors in Early music.

Experts from Basel and Manchester have visited Aberdeen to instruct students who are part of Early Music Ensembles at the University in historical instruments and historical playing, singing, and acting techniques. As part of this they have encountered unusual instruments, such as the theorbo and the lirone. Students can join the ensemble as part of their degrees, or just because they are interested in music, as can skilled members of the wider community.

Ralph Stelzenmuller (Basel) has been leading the overall musical direction of the project, in collaboration with Dr Frauke Jurgensen, an Aberdeen University lecturer specialising in Early Music.

Dr Jurgensen said that both the expert tuition and chance to perform were a unique opportunity for the music students.

“It is rare to be able to bring together so many experts in this field for intensive teaching of this kind – and certainly to be able to stage a brand new opera at the end of it.

We have an extremely talented community of music students and, thanks to the intensive coaching they have received, we look forward to a tremendous performance of Orfeo's Journey" Dr Frauke Jurgensen

“Ralph Stelzenmuller and I have unified scenes from four different operas based on the legend of Orpheus and Eurydice, and developed a framing story, in which we explore the philosophy of music as an encapsulation of the greater order of the natural universe.

“It will be a very unusual production as Italian opera of the early 17th century has not been performed at the University for centuries, although it will echo the type of musical performance which may have taken place here 400 years ago.”

The students have participated in every stage of the production from script writing to scenery as well as performing in the opera and playing the music. They have also helped to raise the funds necessary to cover its costs through a Just Giving page (justgiving.com/orfeosjourney).

Dr Jurgensen added: “We hope audiences will come to the University to see this retelling of one of the most powerful legends, the world's best singer using the power of music to overcome death, with some of the most influential music ever composed. Monteverdi's Orfeo basically set the template for opera until the present day.

“We have an extremely talented community of music students and, thanks to the intensive coaching they have received, we look forward to a tremendous performance of Orfeo’s Journey.”

The opera Orfeo’s Journey will be performed at 7.30pm on Saturday (June 11) and Sunday (June 12) in the Butchart Centre at King’s College, University of Aberdeen.

Tickets priced £10, £5 (concession) can be reserved by contacting the Music Office 01224 272570. They will also be available to purchase at the door before performances. All students are free entry to these concerts.