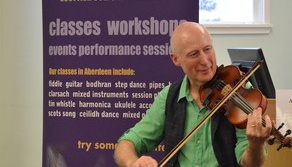 "The north-east of Scotland has a strong tradition of fiddle music and dance which must not be lost for future generations," says a leading expert in ethnology and folklore.

To help preserve this, the University of Aberdeen’s Elphinstone Institute has been awarded a new grant to bring together a network of experts in the field from Scotland and beyond.

The funding, from the Arts and Humanities Research Council, will support the creation of a network of fiddle and dance scholars, practitioners, teachers and enthusiasts.

It will see the Elphinstone Institute and the North Atlantic Fiddle Convention (NAFCo) team up with Cape Breton University, Scottish Culture and Traditions Association (SC&T), and the Traditional Music Forum to pool knowledge of the cultural role played by fiddle and dance traditions in both North-East Scotland and the areas to which these traditions were exported, such as Cape Breton in Canada.

Professor Ian Russell, an honorary professor of ethnology and folklore from the University of Aberdeen and former head of the Elphinstone Institute, said: “North-East Scotland has a rich tradition of fiddle and dance music and it’s important that it’s preserved for generations to come. The Elphinstone Institute was created to research and promote the culture of this region and this grant will enable us to take another step forward in this important activity.

“The new project will bring together eminent scholars, researchers, practitioners, artists, and teachers – some of the brightest thinkers in the world of fiddle music and dance. We will bring together expertise from several different countries where, like Scotland, the fiddle is nurtured and celebrated in tradition.”

North-East Scotland has a rich tradition of fiddle and dance music and it's important that it's preserved for generations to come." Professor Ian Russell

It is based on the theme 'Memory, Music and Movement' and the keynote address will be given by a cognitive psychologist, David C. Rubin, Professor of Psychology and Neuroscience, Duke University, Durham, North Carolina, USA.

Professor Russell added: “I’m really excited about the workshop. It's going to be an absolutely fascinating event and we don't know yet where it will take us. If we did know there would be no point in the exercise.”

The event will be streamed live on http://www.abdn.ac.uk/nafco/live-stream/  and runs from 2pm to 5.15pm to allow those with an interest in the subject in Canada and the United States to participate.

To coincide with the workshop, the Elphinstone Institute is also launching a new NAFCo website at http://www.abdn.ac.uk/nafco/ . This provides an unrivalled resource for fiddle and dance researchers, practitioners and enthusiasts with the inclusion of 63 research articles published as 'open-source' documents, thereby freely available to all. These represent the outcomes of NAFCo conventions held in Aberdeen and Newfoundland. This resource will be enhanced with papers from the Derry/Londonderry and Cape Breton NAFCo conventions. The NAFCo/AHRC networking project will culminate with the next convention to be held in Aberdeen 11-15 July 2018.

The North Atlantic Fiddle Convention (NAFCo) was established by Ian Russell in 2001 to develop new audiences for traditional music and dance, and to act as a cultural, artistic exchange and meeting place for artists, academics, and enthusiasts. NAFCo is innovative, not just for offering performances and workshops to the public, but for presenting distinctive learning opportunities for all ages in traditional music and dance based around the North Atlantic seaboard.

The fiddle has been the most popular vernacular instrument across Europe and North America for over 300 years. However, studies of it and its associated dance forms tend to be scattered across specialist books, theses, and articles, so NAFCo provides a unique forum in which to deepen and integrate conversations about fiddling and dance, allowing scholars and practitioners to develop themes, issues, and methodological enquiries. In this way NAFCo helps develop research networks.