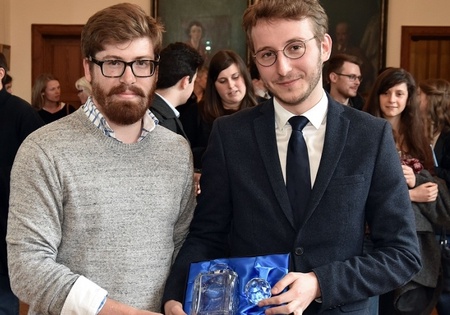 A second volume of a popular University of Aberdeen student-led journal has been published providing an opportunity to showcase the research talents of undergraduates.

Named in honour of the University’s founder, the Elphinstone Review invites students to submit scholarly essays across a wide range of subjects, primarily in the arts and social sciences.

This year’s editor-in-chief, Nicolas Paul, a third year Philosophy and Psychology student says it has grown in popularity since its launch last year.

He said: “Competition for publication was, as last year, intense, with dozens of excellent essays having to be rejected simply because of space in the edition. The finished product showcases a series of superb essays which cover topics spanning the humanities. These include English, Anthropology, Archaeology, Philosophy, Divinity, and Religious Studies.

“Owing to the journal's growing popularity, we had a larger editorial board this year, who we feel have represented the outstanding ability within the college's student body.

The second edition of the Elphinstone Review was launched at an event in The Linklater Rooms to thank students, staff and friends of the University who have provided support.

Owing to the journal's growing popularity, we had a larger editorial board this year, who we feel have represented the outstanding ability within the college's student body" Nicolas Paul

Fraser Bonar, a fourth year English student and the Journal’s managing editor alongside Nicola Robertson, a fourth year Film and Art History student, said the support received from both the student community and staff within the College of Arts and Social Sciences had been outstanding.

“We have tried to continue in the same vein as the founding editors of the journal, aiming to work towards a hopefully long history of the Elphinstone Review,” he added.

“We are immensely grateful to the founding editorial team for establishing such an impressive format and to the University, and the College, for allowing and supporting such a student-led endeavour. The advice and assistance we have received has been invaluable.”

Professor Margaret Ross, Head of the College of Arts and Social Sciences said: “Our undergraduate students produce work of outstanding quality and the Elphinstone Review provides a platform for them to showcase this academic excellence.

“I am delighted to see this editorial team continuing the hard work and editorial rigour of last year’s student board and to see the Elphinstone Review become an established part of our undergraduate life.

“We look forward to seeing it continue to develop student authors and editors in the future.”